Slot Machines with Bonus Games in 2019

It’s no secret that slot machines are the most popular type of casino game in many countries. Rather than roulette or blackjack, online casino players often head to the reels for their fix of fun - with slot machine bonus rounds being particularly attractive to many.

This is often where a slot truly comes to life, with additional features and game settings being enabled which all combine to give you a better chance of landing big wins. But how do you actually activate them, and, more to the point, which slot machines have bonus games? We’ll walk you through our top picks for 2019.

What Are Slot Machine Bonus Games?

A bonus game, also known as a bonus round, in a video slot is an extra level that players can activate as they play. Some are more difficult to trigger than others, ranging from complete randomness to seeing a certain number of the same symbol appear in specific places. In general, the harder it is to activate, the more potential there is to land big wins from it when you do.

A few examples of slot machine bonus games are:

So, it’s pretty clear why video slot bonus rounds go down well with players, as they essentially give you a free-hit at winning something. As such, near enough all software developers include them in their games these days - and this has already led to some high-quality new releases this year.

What Are the Most Popular Slots with Bonus Rounds in 2019?

Released just a couple of weeks ago, NetEnt’s Dead or Alive 2 has been the talk of online casino. Should they have released a sequel to such a classic? Are the 3 Free Spins Rounds any good? Is it actually better than the original?

Well, we’ll leave you to ponder two of those questions yourself, but the fact that Dead or Alive is one of our chosen picks for the best video slot bonus game says it all about the Free Spins Rounds.

As Free Spins is pretty common, NetEnt have created three different Rounds to mix it up - Train Heist, Old Saloon, and High Noon - and you simply select which you prefer after landing 3 or more Scatter Symbols within one spin.

But this is no gimmick. Rather than three of the same thing but with just a different theme, what you choose matters - as you’ll either enjoy increasing Multipliers, Sticky Wilds, or the use of NetEnt’s MAX feature for extra volatility.

Have a look at the trailer below to see what we’re talking about:click here

In a nod to Dio’s classic rock tune, Holy Diver by Big Time Gaming is a medieval title with a special round: Reel Adventure.

Rather than relying on special symbols, you can calculate Reel Adventure’s progress with a knight in armour walking down a path with every spin you make. Along the way, he’ll bump into special chests, with four gemstones to collect.

Once you have them all, this opens up a bonus game, with two choices given. However, there are plenty of possibilities - including rocking out to Holy Diver along the way!

It’s a very unique take, so it was an obvious entrant.

Released only this week, Push Gaming’s The Shadow Order arrives with 5 reels, 5 rows and a hefty number of extra game features.

For starters, there are three coloured orbs hovering above the reels. If you get on a winning run, utilising the slot’s cascade feature, then the orbs may fall onto the reels to act as Wilds. However, if one manages to reach a Hotspot zone before being removed, you can look forward to one of the following:

But that’s not all!

There are four different characters to unlock which enhance the base game even further. You’re given one character to begin, with the other three appearing once you’ve collected enough Ring symbols. Oh, and there’s also the traditional Free Spins Round too. 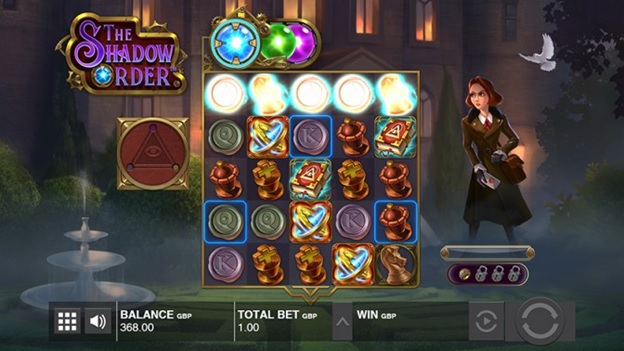 Find the Perfect Place to Play with Casino Professor

With so many top software developers these days, we feel that all online casinos should be offering an extensive library of titles. There’s just no excuse for sites not to have a 500+ as a bare minimum from our point of view,

However, you also need to consider many other aspects - such as the welcome offer, payout speeds, and more. For those issues, head to the Casino Professor for detailed casino reviews and guides.