( The Daily Telegraph ) Victor Lownes, who died on the 11th January at the aged of 88, was the original business partner of the American Playboy supremo Hugh Hefner and ran its lucrative British enterprises, from the mid 1960s until 1981.

A fast-living swashbuckler from Chicago, Lownes was famous for being the highest paid executive in Britain, and for the lothario lifestyle he enjoyed at Stocks, a 42-room Georgian pile in Hertfordshire, where he ran a “training school” for Playboy bunnies, threw swinging parties by night and rode furiously to hounds by day.

The mansion had been a  girls’ boarding school when in 1972 Lownes took it over and the bunnies’ training regime did include some remnants of the traditional Three Rs – including, for some reason, being required to learn the 17-times table. But the extra-curricular side of life at Stocks owed little to the example of Miss Buss and Miss Beale.

Lownes set out to equip Stocks to reflect the lifestyle promoted by Playboy and had the place fitted out with erotic Mogul miniatures, a private disco, games room, swimming pool and (reputedly) the largest Jacuzzi in the world. Throughout the 1970s, the antics of Lownes’s bunnies and the Merc’n’Porsche brigade kept the nation agog. Regular guests included Kenny Lynch, Peter Cook, Dai Llewellyn and the famously bibulous ITN newsreader Reggie Bosanquet, who would strut round in fez and calf-length boots. At other times the curious might catch a glimpse of Mick Jagger, Warren Beatty, Roman Polanski, Keith Moon, Bryan Ferry or Ringo Starr cavorting with nameless models and beauty queens and marquises with foreign names. 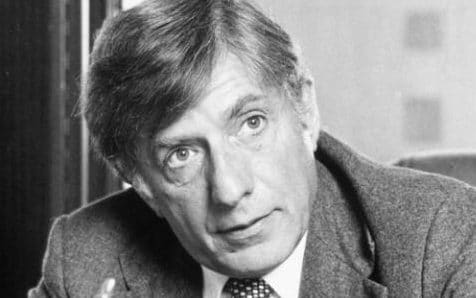 Lownes’s most celebrated thrash went on for 25 hours non-stop, during which 2,000 guests polished off 8,000 bottles of Champagne. The printed RSVP slips for this occasion read: “We are arriving by hot-air balloon or helicopter, please send us landing instructions.” Despite the presence of a battalion of journalists, no stories appeared in the press until three days later, when the few hacks who could remember anything returned to full consciousness.

Not everyone went along with the fantasy. “Someone is going to have to speak to that aspiring British country gent Victor (Playboy) Lownes about how we celebrate our ancient festivals – like Hogmanay,” one killjoy remarked in 1977. “At 3am on the first, the swimming pool was alive to the cries of naked ladies. And they were not singing Auld Lang Syne.” 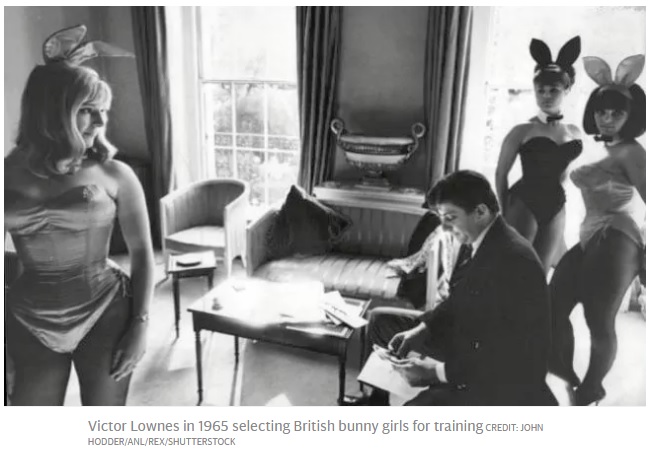 The strict “no dating” rule which forbade contact between bunnies and clients or employees at Playboy clubs did not apply to Lownes. “I was a reasonably attractive young guy, “ he recalled later on. “I was rich and I was also their boss. Power is an aphrodisiac. In the bunnies’ world, I was No 1. It was a feather in their cap to go out with me.”

This was no mere braggadocio. Despite his jowls and an increasing tendency to flab,  it seems that most of the girls regarded Lownes’s priapic feats  as admirable, because he never asked for anything that women were not eager to give. “Let’s face it, we all went to bed with Victor,” admitted one  former bunny.  “He used to have five girls a day, sometimes two at a time,” recalled another, “Angie”, who was 19  when she went to be trained at Stocks. “I did think I’d make him a very good wife, but when I was asked to move up to the attic, I knew it had gone pear-shaped.” 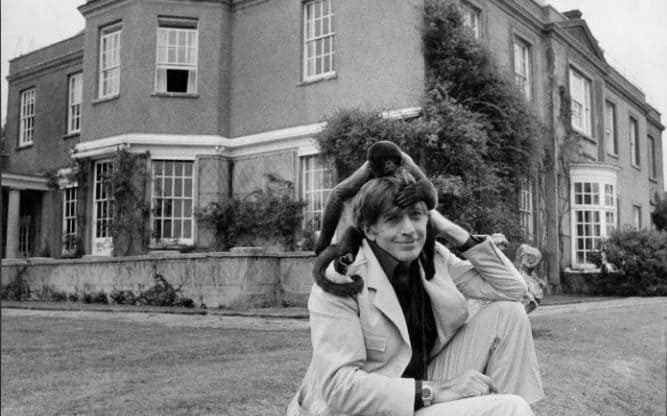 Lownes flaunted his conquests; he would be photographed with “official” girlfriends while his “spares” waited harem-like in the background. He brushed  criticism aside: “A promiscuous person,” he declared, “is someone who is getting more sex than you are.”

The story, naturally, ended in disaster – although not for Lownes so much as for Playboy. By the early 1980s, the London casinos were propping up the entire Playboy corporation, and when their practices came under investigation by the Gaming Board, the organisation’s bosses in America panicked. 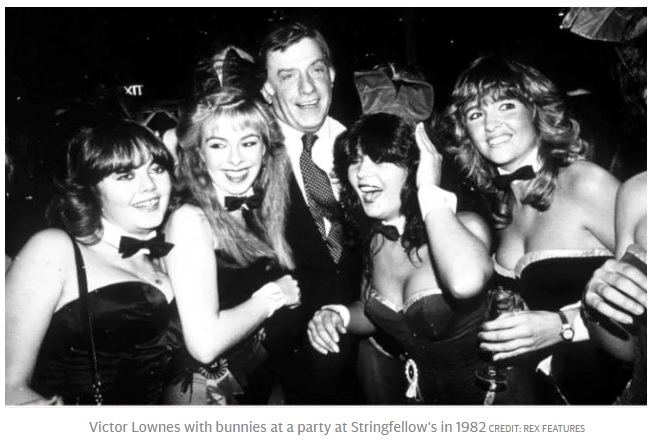 It was largely Lownes’s hubris that attracted the unwelcome attention of the authorities. Two years previously he had been instrumental in helping to deprive his rival Cyril Stein, boss of Ladbrokes, of his gaming licences. Stein vowed revenge and Ladbrokes paid a couple for former Playboy staff to snoop on their former employer.

When  the police raided the Playboy Club in Park Lane and the Clermont in Berkeley Square early in 1981, Lownes professed to be unconcerned. “They won’t find anything wrong and we shall be cleared,” he said. He had to conduct his defence from a hospital bed having cracked his skull in a hunting accident.

Although Playboy had committed no criminal offence, a variety of “technical offences” was uncovered, such as irregularities in cashing cheques. It also transpired that the Liberal MP Clement Freud, a non-executive director of Playboy, had been gambling on company premises against gaming regulations. 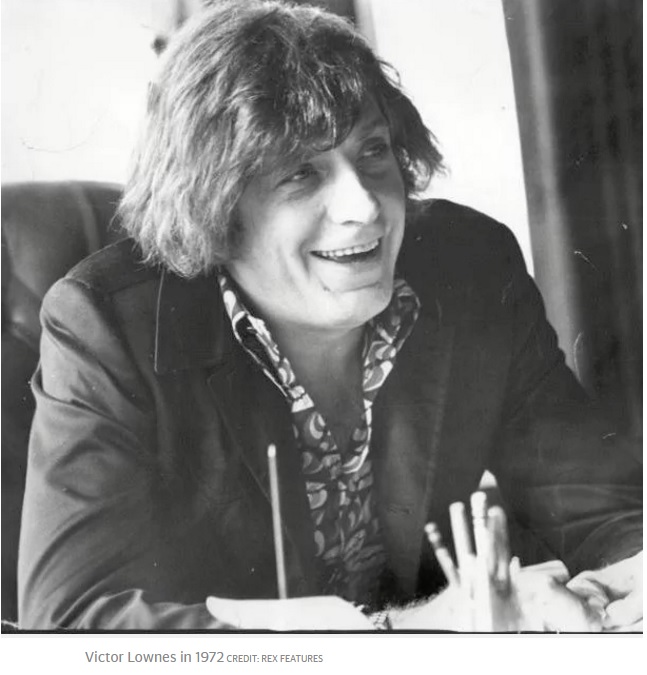 Fearing the worst, the parent company in Chicago sacked Lownes and replaced him with a retired British admiral, Sir John Treacher.  As a result, however. the Gaming Board drew the obvious conclusion that Playboy’s casinos were really being run from abroad and their licences were withdrawn. Playing his part to the end, Lownes was photographed leaving for a holiday with a couple of lady friends.

Victor Aubrey Lownes was born on April 17 1928 into a wealthy family at Buffalo, New York State, but they later moved to Florida. He received an early education in the facts of life from a teenage nanny who gave her young charge detailed accounts of her sexual liaisons along with his bedtime story.

His father might well have had cause to worry about young Victor when, aged 12, he was given a cigar to smoke as aversion therapy and promptly demanded another one. A few months later he shot and killed his best friend in an accident, a tragedy which led to his forced enrolment at the New Mexico Military Institute in Roswell. 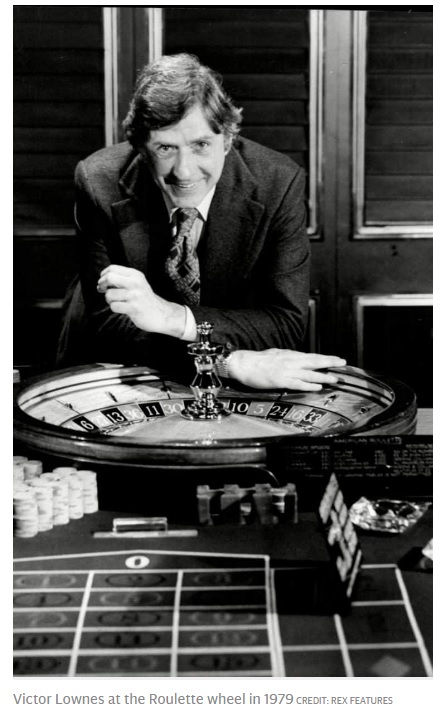 From there he went on to the University of Chicago where he obtained an MBA and met his first wife, Judy Downs. He was married at 18 in 1946 and had a son and daughter. After several dead-end jobs he found employment at an industrial firm in Illinois. “I was promoted to manager within a few months,” he recalled, “due solely to hard work, conscientiousness and the fact that my grandfather owned the company.”

But after seven years of marriage Lownes decided that he had had enough of  respectability, ditched the job and the family and moved to Chicago where he set himself up in a huge studio apartment with a discreetly curtained boudoir, and embarked enthusiastically on the lifestyle for which he would become notorious.

In 1954 he met Hugh Hefner, a man whose almost identical interests had led him to found Playboy magazine. Lownes was asked to write a couple of articles and in November 1955 was offered a full time job as promotions director. 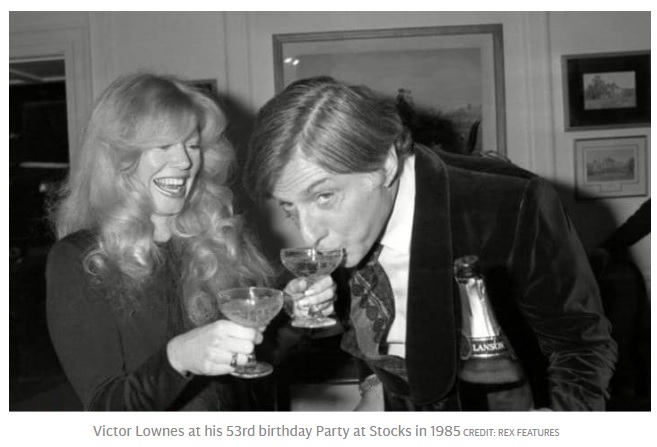 He set about drumming up advertising  and it was he who suggested to Hefner that they diversify by opening a club. The first Playboy Club opened its doors in Chicago in 1960. It was an immediate success and more followed. But by the early 1960s, London had emerged as the centre of all that was young and swinging and in 1963 Lownes asked Hefner to be sent there to open a British Playboy Club. He moved into a house in Montpelier Square and began looking for premises.

Gambling had recently been legalised in Britain and Lownes realised there was an opportunity to make serious money if the club had the added attraction of a casino. A Playboy Club was opened at 45 Park Lane in July 1966 and was an immediate success. In 1972 Lownes bought the Clermont Club in Berkeley Square and 1973 saw the addition of the Manchester and Portsmouth Casino Clubs. Of the money which streamed out of the West and into the pockets of the oil sheikhs, a fair portion flowed back across the tables of Playboy’s casinos – £660 million between 1975 and 1981. “I’ve always thought,” Lownes joked, “that if the Israelis really wanted to get the Arabs to the peace table, it would be best to cover it in green baize.” 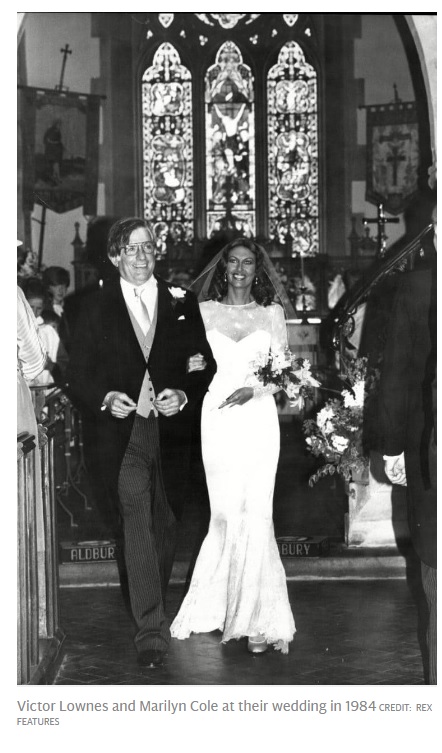 Lownes   later moved to 1 Connaught Square, which became the venue for wild parties when he was not in residence at Stocks. In addition to a leather-upholstered cocktail bar and fur-covered walls, the house boasted a grandfather clock painted by Timothy Leary. Lownes would hold court in his bedroom wearing little more than a gold chain nestling in his hairy chest while a non-housetrained bush baby sat on the picture rail above him.

Back in America, however, Playboy’s fortunes were beginning to fade and in 1975 Hefner asked Lownes to return to Chicago on a part-time basis, giving him unlimited powers to trim the fat. Among other casualties of the Lownes cull was his own son, Val .

In 1969 Lownes had been partying in London with Roman Polanski when Polanski’s wife Sharon Tate was murdered by the Manson Family. After his return to America, Lownes persuaded Hefner to finance Polanski’s blood-soaked version of Macbeth  through Playboy when no one else would touch it. Polanski went $600,000 over budget and then proceeded to mock Playboy’s generosity. Lownes was so furious that he gave back the life-sized gold penis that Polanski had modelled for in happier days. “I’m sure you’ll have no difficulty finding some friend you can shove it up,” Lownes told him.

By 1981 Lownes was senior vice-president in charge of the Playboy casinos worldwide. With the gaming licence approval for the Victoria Sporting Club in February 1981, Playboy Enterprises became  one of the most profitable gaming operators in Britain.

Lownes’s sacking later that year dented his pride, but little else. He had accumulated a fortune during his years at Playboy which would enable him to live in comfort for the rest of his life.

He had, after all, had vague hankerings after respectability. He rode to hounds with the Quorn, and when not cavorting in the Jacuzzi, affected the style of a local squire. In 1984 he got married, for the second time, to Marilyn Cole, with whom he had had a tempestuous five-year affair some years previously. Miss Cole had become famous as the first full-frontal Playboy Playmate of the Month, in January 1972, became Playmate of the Year in 1973 and continued to pose until her marriage. 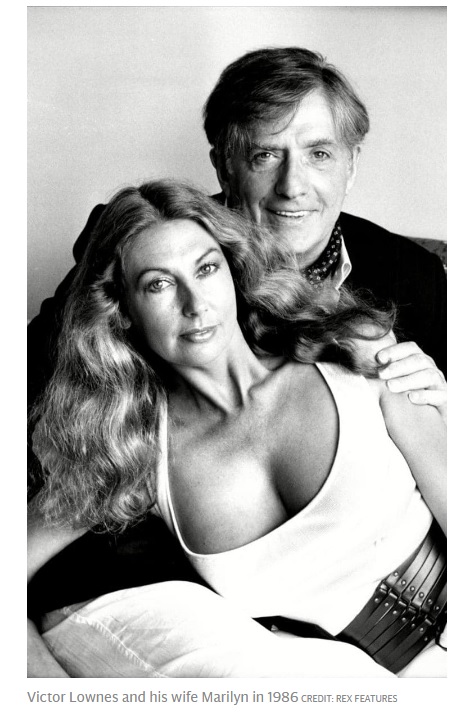 The wedding, held at a church near Stocks, was traditional in nearly every respect. The bride was tastefully and discreetly attired in white and the groom wore a morning suit, though he had omitted the customary stag party: “Why would I want one? I’ve been having one for the last 40 years.” The service was broadcast to the surrounding village by loudspeaker. “It’s official,” said Lownes. “We want people to know we are no longer living in sin.”

Lownes is survived by his wife and by the two children of his first marriage.