The Wild Coast Sun has been recognised by the Alfred Nzo District Municipality in the Eastern Cape for its role in aiding the vaccination efforts in the province.

The resort, part of the Sun International group, was the first hospitality venue in the Eastern Cape to be utilised as a vaccination site to assist government in vaccinating people against the COVID-19 pandemic.

The Wild Coast site opened as a mass vaccination site to the public on 11 August as government looked to up its vaccination drive. 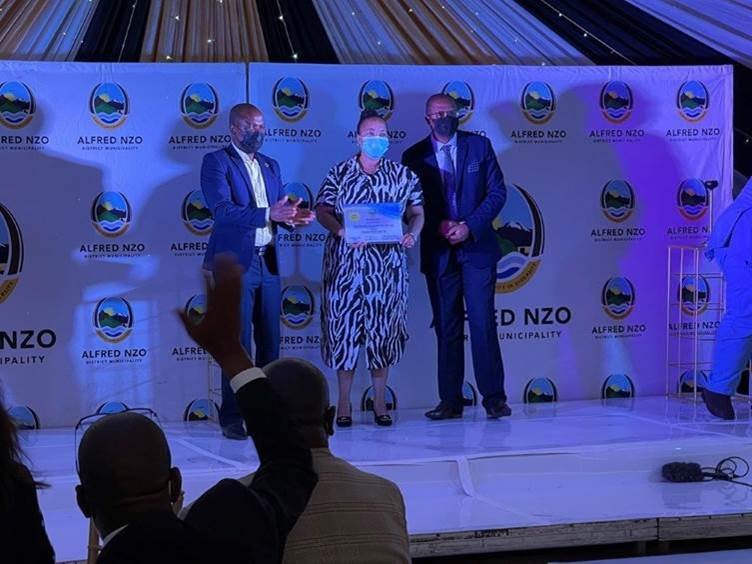 There were two vaccinators on site, each with the capacity to vaccinate a minimum of 50 people per day. To date, the site has vaccinated over 4,400 people, including about 600 Wild Coast Sun workers and contractors who did not have to be accommodated at government health facilities. The site also vaccinated concessionaires, guests and people from the surrounding communities.

The Alfred Nzo District Municipality presented Wild Coast Sun management with the award for the most effective vaccination site as part of private partnership with government during the 2021 Mayoral Health Care awards at a ceremony on 27 October.

The Mayoral Health Workers Awards ceremony took place at the O.R. Tambo & Adelaide Tambo Regional Hospital in Mbizana. The awards ceremony was hosted by Alfred Nzo District Municipality Executive Mayor Polelo Mohale to recognise and honour people and institutions for their contribution in the fight against COVID-19.and remembering all healthcare workers from Alfred Nzo District who died in the line of duty.

Wild Coast Sun General Manager Peter Tshidi said the vaccination site project had been run in collaboration with the Eastern Cape Department of Health to expand access to life-saving vaccines.

“As the Wild Coast Sun, we are grateful to have had the opportunity to contribute in a meaningful way to the fight against the pandemic,” Tshidi said.

“The only way our country, and indeed the world, will be able to overcome this challenge is by working together in partnership and we feel privileged to have played our part.” 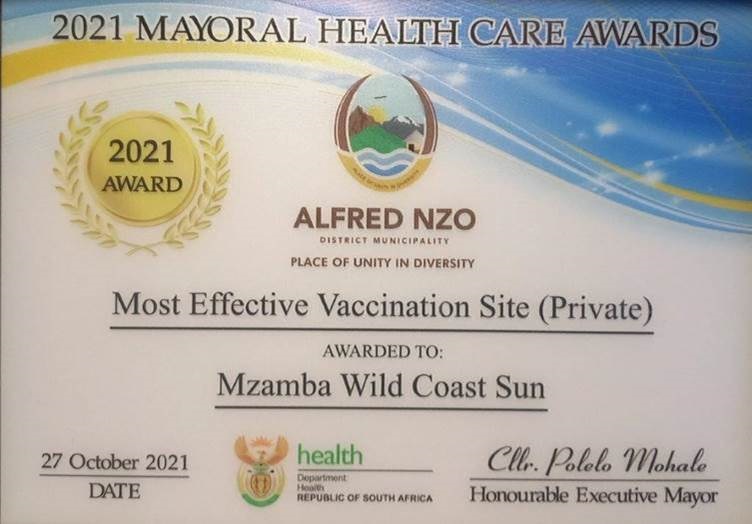 The vaccination centre was launched on 11 August with officials from the provincial health department in attendance. Zak Mbethe, CEO of Oliver and Adelaide Tambo Regional Hospital, said at the opening that “such partnerships between government and the private sector show that, when we join forces, we can have a bigger and more meaningful impact on our communities”.

The Wild Coast Sun site accepted those registered on government’s vaccination portal, as well as walk ins, and even though the resort falls under the Eastern Cape, the site also accommodated persons from the adjacent KwaZulu-Natal province.

The site remains open and available to be used as required by health authorities.

The Wild Coast Sun was the first hospitality establishment in the Eastern Cape to avail itself to government as a vaccination centre and the second such resort to offer vaccinations after Sun City, another Sun International property.