Macau’s Secretary for Economy and Finance, Lei Wai Nong (pictured) who oversees the city’s casino industry, on Wednesday urged the public to be “patient” about the return of large-scale tourism.

He said the local government was “working hard” in “striving” for travel ties with mainland China to be normalised in a “gradual manner”. Mr Lei added there needed to be sufficient “risk control” measures in relation to Covid-19.

Mr Lei was talking to the media on the sidelines of a vocational skills contest for casino workers, held by the Macau Federation of Trade Unions. 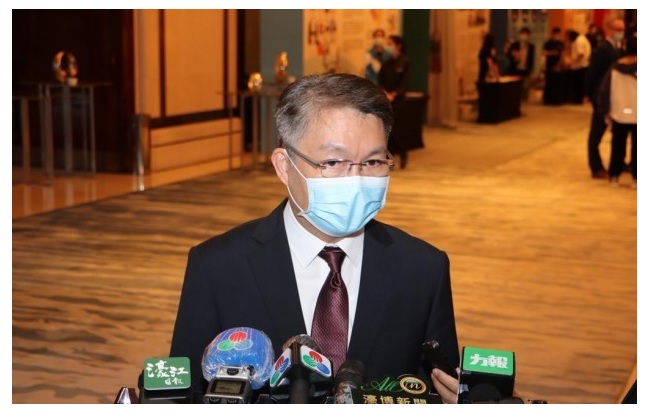 Secretary Lei was asked by GGRAsia if the city could expect the resumption in the current quarter – as predicted by some investment analysts – of mainland China’s exit-visa system for independent travel to Macau, known as the Individual Visit scheme (IVS).

The Macau official did not commit to any time frame but stressed that the government was in “close contact” with the authorities in mainland China about resuming travel ties.

He added some practical steps were already in place to prepare for such a move.

“We have some stress tests practised at our immigration control checkpoints… we’ll make sure that the reopening” of large-scale tourism from the mainland, “is done in a gradual manner,” said Mr Lei.

“Because the [Covid-19] pandemic is still there, we have to perform the virus-prevention measures very well,” Mr Lei remarked.

When risks associated with the pandemic were “controlled”, the city’s travel ties with mainland China could be “resumed gradually”, the official stressed, without offering any timetable. “The government is working hard on it, and the resumption of IVS scheme will be announced in due course,” Mr Lei said.

The senior Macau official repeatedly stressed that a quarantine-easing measure for travel from the city into Guangdong province – the first stage of which came into effect on July 15 – marked an “important turning point” for the city in terms of an anticipated increase in visitor traffic from mainland China.

The government in Zhuhai, the mainland city closest to Macau, said on Tuesday that there would be some further easing of quarantine-free travel into Guangdong province, either for residents of other mainland provinces, or Macau ID holders.

Mr Lei was asked on Wednesday if he had any forecast for the city’s casino gross gaming revenue (GGR) for the second half of this year. A previous forecast issued by him in March, for GGR in the second half, appeared to have assumed an earlier large-scale resumption of tourism.

In an address to the plenary session of the city’s Legislative Assembly on March 26, the Secretary had mentioned government estimates that the city would see its casino GGR reach MOP80 billion (US$10 billion) for the second half of this year, and MOP130 billion for full-year 2020, implying a first-half performance of MOP50 billion. As of June 30, Macau casino GGR for the calendar year was only MOP33.72 billion, according to data from the city’s casino regulator.

The official noted on Wednesday: “The pandemic has been lasting longer than we expected.”

He added: “We’ll be paying close attention on what will happen in the third and fourth quarter, and when necessary, we will further adjust our fiscal budget.”

In other developments, Robert Drake, chief financial officer of Macau casino operator Galaxy Entertainment Group Ltd, was quoted on Wednesday by the Hong Kong Economic Journal, as saying the recovery process for Macau’s gaming industry would be a “marathon” and not a “sprint”.

He noted quarantine-easing measures for travel from Macau to Guangdong had helped stimulate a “mild increase” in the city’s inbound visitor traffic. The casino operator was stepping up staff training to get workers prepared for the recovery of tourism, the journal cited Mr Drake as saying.