Atop of Downtown Grand and under the shadow of the new eight-story hotel tower, representatives from the property, its parent company CIM Group, the City of Las Vegas –  including Mayor Carolyn Goodman,  Ward 5 City Councilman Cedric Crear, Ward 1 City Councilman Brian Knudsen, and City Manager Scott Adams  –  and a small group of invited guests gathered for a brief program to celebrate the completion of the Gallery Tower’s construction, which began in January 2019. 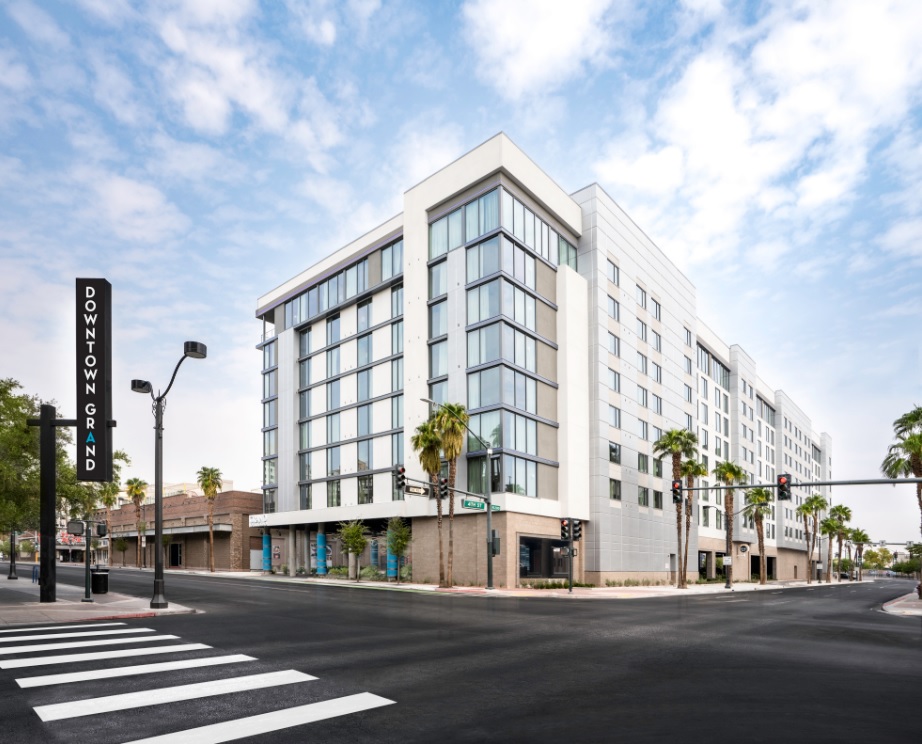 “Downtown Las Vegas is a celebration of life and the culmination of the good things in it,” shared Mayor Goodman. “And one of those things is the Downtown Grand, which opened its doors during my first term as mayor. It’s truly wonderful to be here with you today to celebrate the property’s expansion as well as the continued progress of our great city.” “Small enough to be intimate but luxurious enough to be a world-class resort, welcome, Gallery Tower at Downtown Grand as the newest addition to the Downtown Las Vegas skyline,” added Councilman Crear during his remarks. 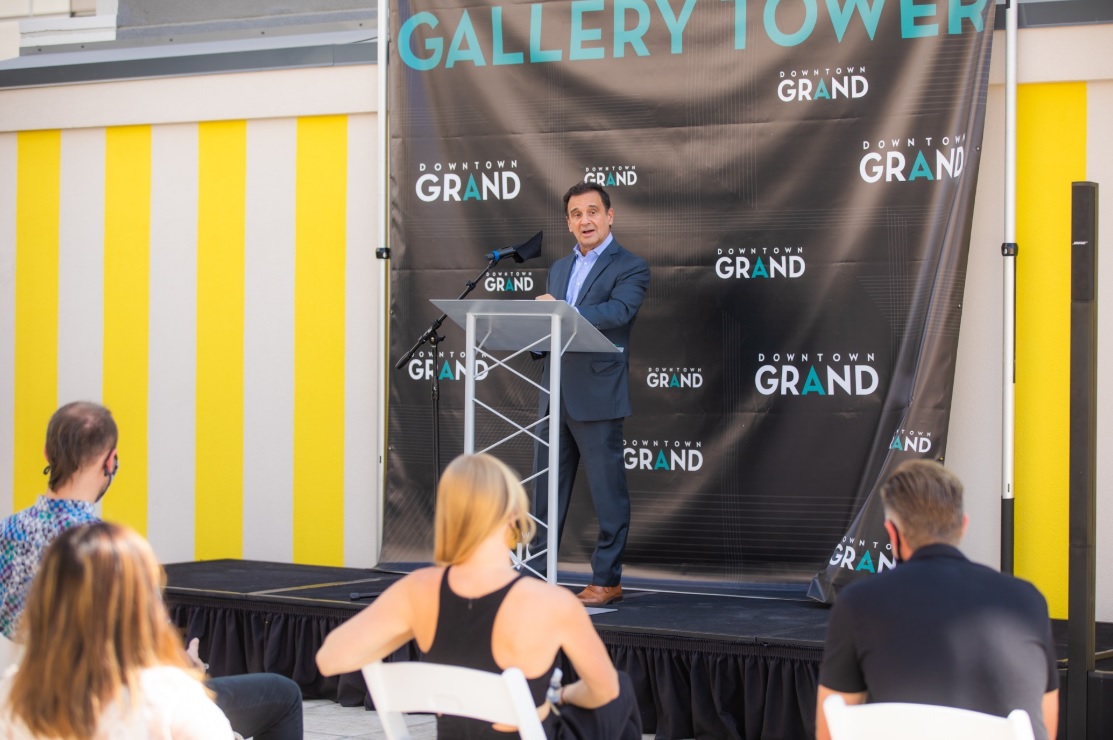 Helping to lead the westward extension of Downtown Las Vegas’ renowned art scene, the Gallery Tower derives its name from the property’s art collection which includes works in varying sizes and mediums by local and internationally recognized artists. The centerpiece of the Gallery Tower’s art program is “Transmigrations,” an interactive, augmented reality-based art installation exclusively available to guests staying in rooms in the Virtual Pad collection. Using a proprietary app, created by multimedia artist Camila Magrane specially for Downtown Grand, on an in-room iPad, guests can view and interact with the augmented reality features of the artwork that is located just outside of the hotel room window. Curated and produced by We All Scream and BUILDING 180, “Transmigrations” is the first of its kind for a Las Vegas hotel. 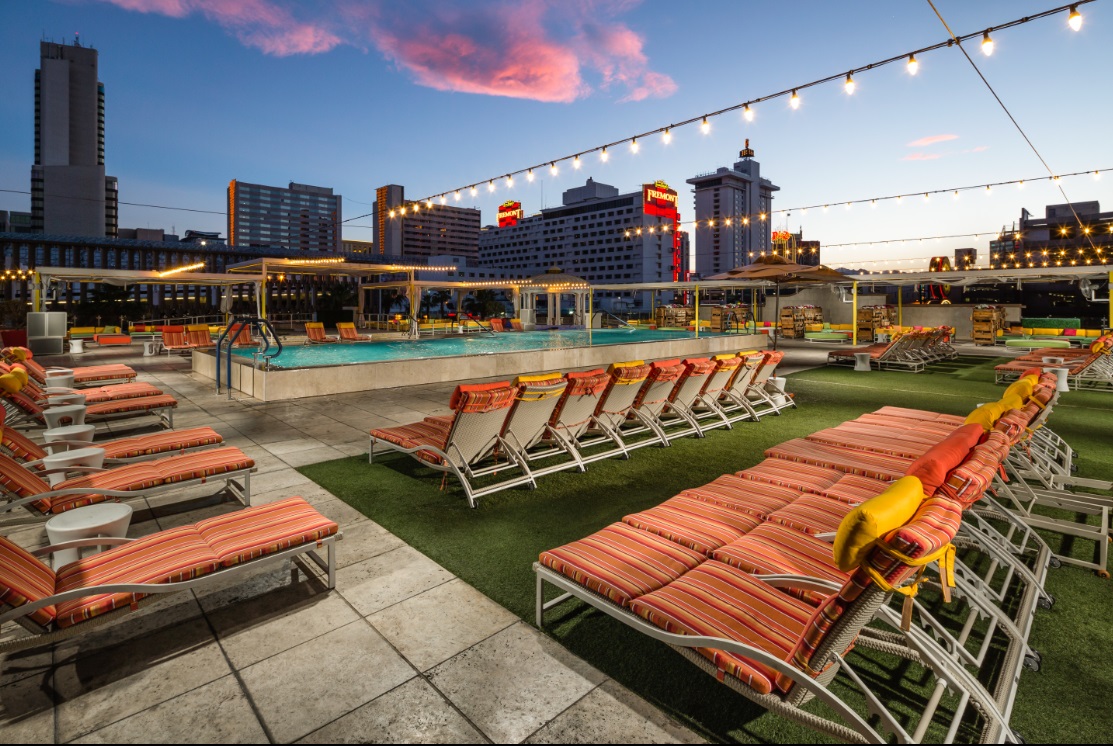 “Interactivity in art allows viewers to be involved in ways that other art cannot. It creates wonder and playfulness that is so valuable in our lives,” shared Magrane, while discussing the inspiration behind her work. “I don’t know that an experience like this exists in any other hotel in the world, so it’s truly an honor to be a part of such an innovative project and creative endeavor.”

“We are thrilled to be celebrating the grand opening of our new Gallery Tower with you all today and I want to thank our many partners, including those at CIM Group, who’ve made this day possible,” shared John Culetsu, vice president and managing director of Downtown Grand. “Please join me in raising your glasses in celebration of the hard work of many, and to welcome our newest addition to Downtown Grand, the Gallery Tower.”

After concluding the program with a celebratory champagne toast, media and invited guests were ushered inside for small group tours of the towers’ four room styles, including a Virtual Pad room where guests could experience “Transmigrations.”

Pairing contemporary architecture with modern design and art from several mediums, the 250,000-square-foot Gallery Tower has redefined the intersection of 4th and Ogden with a vibrant new entrance to the hotel’s casino floor and offers a boutique hotel experience for the modern traveler within its seven guest floors. With an assortment of room configurations, including three new 1,500-square-foot penthouse suites, 47 studio units, 20 one-bedroom suites, 313 Superior style rooms, and 112 Virtual Pad rooms, Gallery Tower’s addition brings the property’s total inventory to 1,124 hotel rooms. 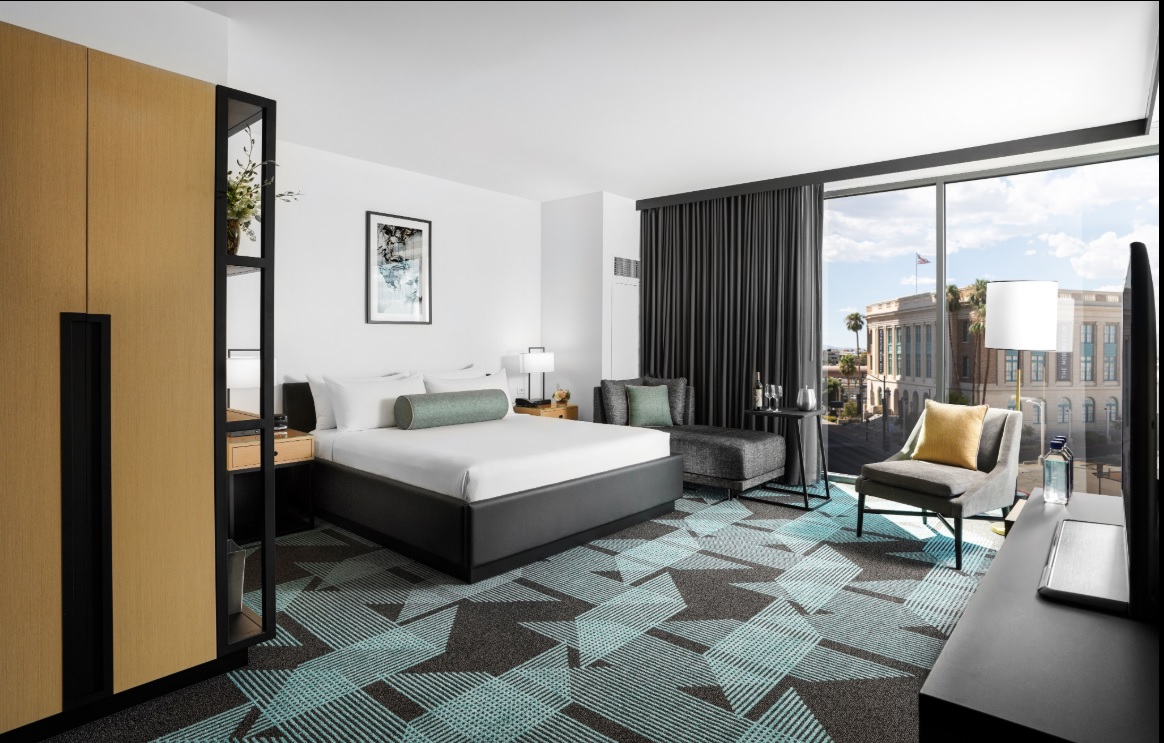 To accommodate the additional room inventory, Downtown Grand has expanded the footprint of its fitness center to offer more than 1,500-square-feet of state-of-the-art workout space. With the opening of Gallery Tower, Downtown Grand is now equipped with digital kiosks located inside the new porte-cochere to allow contactless check-in and check-out for guests with prior reservations. Gallery Tower is also the only tower on property with direct connection to the Citrus Grand Pool Deck and offers easy access to the hotel’s ground floor casino, dining and entertainment offerings.

The Downtown Grand reimagined the downtown traveler when it opened in 2013. Defined by its industrial chic aura and highlighted by open ceilings, ornate fixtures, and heavy structural elements the hotel was at the forefront of the Downtown Las Vegas resurgence along with the relocation of Zappos headquarters, the development of the Fremont East District, and Life is Beautiful Music Festival. Seven years later, the property continues to serve as a central hub to both tourists and locals alike for all of Downtown Las Vegas’ events and happenings.

Downtown Grand is now accepting room reservations for Gallery Tower. For more information and to book a stay at Downtown Grand, visit DowntownGrand.com.

Awarded the 2019 TripAdvisor® Certificate of Excellence and the 2020 AAA Inspector’s Best of Housekeeping Award, Downtown Grand Hotel & Casino is a unique hospitality and entertainment destination right in the heart of revitalized downtown Las Vegas. Located on 3rd Street between Ogden and Stewart, Downtown Grand encompasses an entire urban block of hotel, casino and dining amenities.  With the opening of its third hotel tower in September 2020, the property features an eight-story, 18-story, and 25-story tower adjoined by a walking bridge elevated over 3rd Street, with 1,124 guest rooms and suites offering luxury accommodations that set a new standard for sophistication and style in Downtown Las Vegas. Downtown Grand’s casino offerings include 25,000 square feet of gaming space with the hottest slot machines, table games and a fully featured sports book powered by William Hill. Restaurants, bars and entertainment options include Freedom Beat, Furnace Bar, Art Bar, Sidebar, The Spare Room Showroom, and the award-winning Las Vegas steakhouse Triple George Grill. Partnering venues include the famous Hogs & Heifers saloon and Pizza Rock, renowned as one of the best pizza restaurants in the city. Downtown Grand features Citrus Grand Pool Deck, a rooftop pool experience with more than 35,000 square feet of entertainment and special event space, an infinity pool, restaurant and bar, semi-private cabanas, a fire pit and a grass seating area.

Downtown Grand Hotel & Casino is a member of the Preferred Hotels & Resorts Connect Collection. All guests of are eligible to enroll in the I Prefer hotel rewards program, which extends points redeemable for cash-value Reward Certificates, elite status, and special benefits such as complimentary Internet to members upon every stay at more than 700 participating Preferred Hotels & Resorts locations worldwide