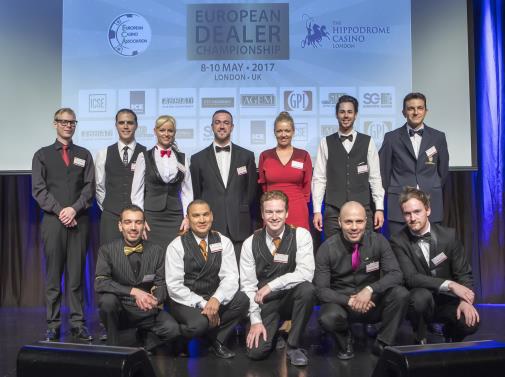 Organised by the European Casino Association (ECA) in conjunction with UK’s National Casino Forum, the 2017 championships took place from 8th – 10th May in the heart of London’s capital, a first in the competition’s 11-year history. Hosted within the historic former Hippodrome theatre which dates back to 1900, The Hippodrome Casino provided a compelling backdrop for the prestigious competition, as Europe’s dealer elite battled it out to be recognised as the best in the business. 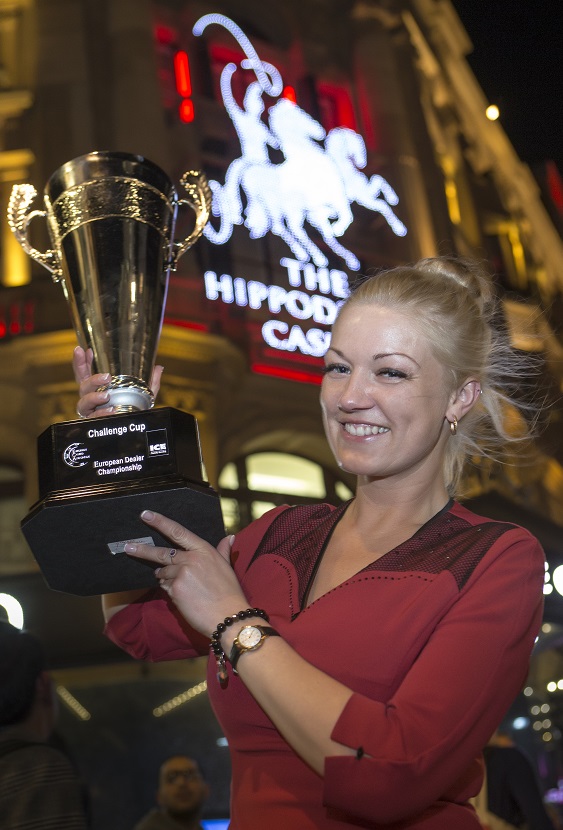 Launched in 2007, the EDC has grown into one of the premier events in the gaming industry’s calendar and this year brought together 33 participants from a record-breaking 20 European countries. In a quest to crown Europe’s top dealer, two talented entrants from some of the biggest casino operators in the industry travelled to the UK’s famous capital city to take part, including ambassadors from Austria, Belgium, Denmark, Estonia, Germany, Italy, Luxembourg,  and Sweden to name but a few.

Not overlooking UK representation, Jamie Cummins from The Ritz Casino was named overall Maths Master whilst Stuart McCallum from Les Ambassadeurs also flew the flag for the home nation and performed with flair. Both contestants were entered into this year’s competition following winner and runner up accolades in February’s UK Dealer Championships, organised by the National Casino Forum.

Commenting on the accolade of European Dealer Championship 2017, Antra Gaike said: “I am delighted to be crowned European Dealer Champion, 2017. I’ve been working in the industry for eleven years and found the job hard to begin with but with every day I spent in the casino I began to love the environment more and more. The skills required to be a dealer are difficult to master but winning today proves I am strong. I feel energised, confident and excited to see what the future brings as a result of winning this prestigious title.”

Per Jaldung, European Casino Association Chair commented: “For the ECA, the European Dealer Championship is always a fantastic forum to demonstrate the great skill and talent of the thousands of employees in the casino industry across Europe. The EDC competitors once again showed great finesse, delivering a fascinating competition.”

Tracy Damestani, CEO of the National Casino Forum said: “Once again the European Dealer Championships has successfuly brought the casino community together for what was a highly competitive and riveting event at the spectacular Hippodrome Casino. The high calibre of talent on show this year is testament to how sought after the title is amongst dealers across Europe and the international recognition of the annual competition.”

Simon Thomas, CEO of The Hippodrome Casino, added: “We're proud to have hosted the EDC and to have welcomed some of the most talented dealers in the world to the Hippodrome.”

For more information about the EDC, please head to europeandealerchampionship.com and follow the ECA on Twitter (@ECAssociation) and Facebook (facebook.com/EuropeanCasinoAssociation) using #EDChamp for the latest information.

The ECA would like to thank the EDC sponsors – Clarion, GPI, Association of Gaming Equipment Manufacturers, Abbiati, Scientific Games, ICSE, CLS and CTC Holdings – without them the event would not have been possible. The ECA is also very grateful for the Hippodrome Casino and the entire organising team for putting on another great EDC.

The ECA represents licensed land-based casinos in Europe, with 26 members and over 70,000 direct employees supporting local economies across Europe. It has members from nearly all EU Member States, as well as Switzerland, Serbia, San Marino and Montenegro. The main purpose and objective of the ECA is to address and promote issues related to casinos.About the ECA

NCF represents all of the land based casino operators in the UK. This includes large scale operators like Genting and Grosvenor, independents such as Les Ambassadeurs and other high end Mayfair casinos as well as mid-range regional casinos.

It also offers associate membership to suppliers, lawyers, accountants and others who work with the casino industry. Rebranded in 2008, the NCF has the overarching aim of promoting a positive agenda for a well-regulated, socially responsible and economically sustainable casino industry as part of the mainstream leisure and entertainment sector. In doing so, it seeks to boost employment, encourage economic growth, tourism and revenue to HM Treasury. For more information, visit www.nationalcasinoforum.co.uk