Giuliano Bendinelli etched himself into European Poker Tour history with his stunning victory in Barcelona and it was a win that sent ripples around the poker community.

The Italian found himself trailing by one big blind on the final day of the event to France’s Jimmy Guerrero in heads-up play before turning the tables in dramatic style.

Bendinelli produced what can only be described as a miraculous “chip and a chair” story before snatching the trophy, and with it, a cool $1.5million cheque to boot for his exploits. 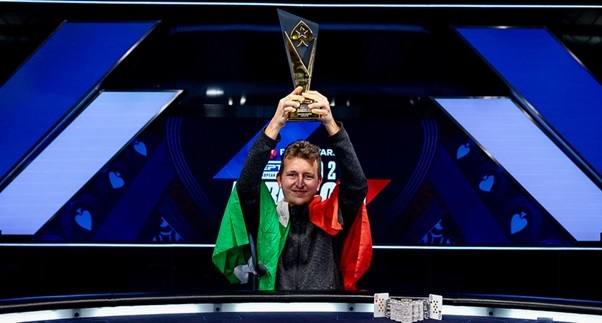 Although he is no stranger to EPT competitions, Bendinelli surpassed his career earnings with his victory in Barcelona as his previous largest payday was the $131,000 he won when he was crowned champion of the ‘Monaco Cup’ side event in the 2013 EPT Grand Final Monte Carlo.

Bendinelli has spent more than a decade on the EPT circuit, and while success has been hard to come by, he was almost lost for words after his triumph in Barcelona.

When asked for his thoughts, Bendinelli said: “I can’t believe it. It’s the best day of my life. I’m speechless.

“I can’t believe it happened. It is the most important day of my life. I’m proud about how I played, but also, I won some showdowns, of course, to be here.

“I needed luck, like the last hand with quads against a full house, so it’s a mix between skill and luck. I’m grateful to be here.”

Bendinelli – who became the third EPT Main Event champion from Italy – was the undeniable star in a stacked field of 378 players. If anything, his sense of staying power and ability to seize the moment worked in his favour. However, it will also serve as a source of inspiration for aspiring poker players.

Poker has been growing in popularity over the past few years, and with more events available on the pro tour, it has made for compelling viewing. But for those less experienced, the digital casino environment provides the perfect gateway for competitive poker. Many of the top operators nowadays will run regular tournaments where players can vie for big prize sums. For those gamblers wishing to find the best casino bonuses, they should check to see whether poker is eligible before proceeding.

Naturally, Bendinelli’s win in Barcelona defied the odds. However, the way he masterminded his comeback was simply spectacular and perhaps it could kickstart a run of success on the EPT for him. For poker players, Bendinelli’s win goes to show that anything is possible even when staring down the barrel of defeat.