Evert Montero, non-executive Chairman of Juegos Miami and President of Colombian trade body, Fecoljuegos, sets out the key objectives of this year’s event, why Latin American is a continent full of surprises, and his aspirations for Juegos Miami to become the biggest event in the world.

Have you set out any objectives for your term of office as Chairman of Juegos Miami – what do you hope to achieve?
The main objective is for Juegos Miami to become a space for reflection and analysis of what’s going on in Latin American gaming industry. Although the event is already internationally important, my goal is for it to become even stronger, and for Colombia to play a key role in its development.
We also hope that Juegos Miami will be the perfect opportunity for manufacturers, suppliers and the gaming industry’s entrepreneurs to have interesting discussion and do the business that strengthens their companies.
Attendees will have the chance to take part in the academic analysis and discussions Juegos Miami provides on the issues affecting the sector, and the massive opportunities that the region has in all different gaming verticals. 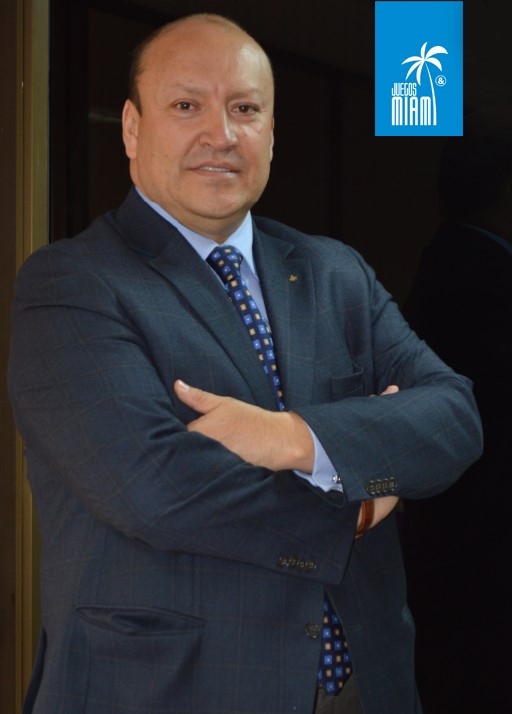 What message would you extend to senior members of the LatAm industry who have not previously attended Juegos Miami?
Nobody should miss Juegos Miami; it is the most important show on the continent. This event brings together important business people, suppliers and regulators from all around the world with the aim of creating permanent dialogues which allow for an analysis of the state of the industry.
This is an event which, in addition to enriching the knowledge of attendees, functions as a networking space to build new relationships and forge different strategic alliances which benefit all members of the sector.

In your opinion what can the international industry learn about doing business in Latin America by attending Juegos Miami?
Latin America is a continent full of surprises, there are many things which stand out about it, and many things people can learn from the different countries and peoples of the region. Speaking specifically about Juegos Miami, the international industry will be lucky enough to learn how Latin American markets are developing, what the individual characteristics of each country are, and how they can harness these for a more profitable business.
It is important to recognise that even though the principles and structure of gambling is the same in most of the world, every country has their own cultural approach to them, their own idiosyncrasies and regulation, and that’s why people should attend Juegos Miami – to get to know the key figures from the Latin American industry.

You’ve recently returned from ICE London, the world’s biggest gaming expo, how big do you think Juegos Miami can get?
I hope that Juegos Miami will become the biggest event in the world. I believe the Latin American gambling industry has a huge potential, but the region still has a lot to do in order to reach total market maturity when it comes to this sector.
We are conscious of the professionalism with which ICE London is organised, and of its international importance, and we must take advantage of the opportunity to attend this type of event and translate some of those experiences over to Juegos Miami.
I am certain that Juegos Miami will grow to the same size, or similar, to ICE and for that reason we hope to strengthen the event with more space for analysis and reflection, and a bigger commercial exhibition which would give more businesses the chance to participate.

What was the response to Juegos Miami when you spoke with attendees at ICE London?
The reaction was very positive. I had the opportunity to speak to a large number of ICE attendees, who were very interested in and pleasantly surprised by Juegos Miami. I believe that what caught people’s attention the most, and this is a great plus for us, is the academic offering and the opportunity to strike up business relationships which allow visitors to pinpoint their agreements and partnerships.

How do you think the various trade bodies, including Fecoljuegos, can benefit from attending Juegos Miami?
The advantage is to be able to participate with our members and the rest of the gaming sector. These are the spaces in which people can get to know Fecoljuegos and give us the opportunity to become stronger.
Juegos Miami allows us to understand how to improve the sector, how we become a better association, and how we grow more faithful to the purpose of an association as a voice and representative for the sector both in government and the private sector. I believe Juegos Miami is the appropriate space to share and listen to experiences from other countries’ associations as well.

What are you most looking forward to at Juegos Miami?
I am very honoured by the recognition that has been given to Colombia by asking me to participate as President of Juegos Miami, it is a very important recognition for me as the President of Fecoljuegos, for the association, and for the Colombian gaming sector on the whole, as it is the perfect opportunity to show how great our country is and the strengths of the region.
Our intention at Juegos Miami is to explain what is happening in Colombia, to show the country’s opportunities and share the experiences that we are living at the moment, especially as Colombia recently regulated online gaming, and was a pioneer in doing so.