Coasting in the Casino

Blame it on the Air Force. Or maybe it was skydiving. Somewhere along the line, the thrill bug bit William Kitchen, turning him into a prolific inventor. It all began 30 years ago in his living room, with a model for a thrillride prototype made out of broom handles and G.I. Joe parts. “At the time, my girlfriend looked at this ride …and told me I was absolutely crazy,” Kitchen recalls.  “Nevertheless I built one and people lined up all day

to get on it. I patented it and it became Skycoaster, the fastest-selling ride in the world. They’re in almost every Six Flags park, every Cedar Fair park and smaller seaside parks, everywhere from Sweden to New Zealand.” 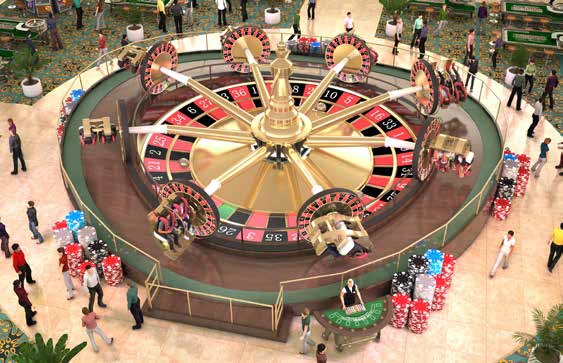 That was many thrill-ride inventions ago. Kitchen’s post-military career initially took him into radio but once the thrills caught hold broadcasting just didn’t have the same allure. His initial venture was into the bungee-jump business, “but the bungee business got a bad reputation, mainly because people were being very careless.” That’s when he started tinkering  with broom handles and action figures. “I sold the Skycoaster company and all the franchising rights and decided to try something I thought was even more exciting and that was an indoor skydiving machine that would allow people to replicate the excitement of jumping out of an airplane.” That attraction became iFly, the indoor Skydiving attraction known worldwide.