The gaming industry has chosen its most beautiful representative who became the new Miss Gaming BEGE 2016. After a close-run competition between 18 ladies, held in two rounds , the charming Milica Markovic was awarded by the honored jury of the contest and received the winner’ crown. She participated in the competition on behalf of Admiral club. The gambling hall made miss Markovic its representative after a tough selection made with the help of  Intersound modeling agency. Her first runner-up became Miss Sofia Princess Casino - Biljana Lazarova, and the second - Miss Sesame - Denitsa Petkova. The audience chose their favorite beauty as well - Angie Georgieva, Miss Palms Merkur Casino.

The beauties were judged by an honored jury that included Irina Papazova - owner of Intersound, Proff. Lubomir Stoykov - president of the Academy of Fashion, Hristo Chuchev - official designer of Miss Gaming BEGE 2016, Galia Cholakova - editor in chief of Story magazine, and the top models - Cveti Razlojka - Mrs. Globe Bulgaria 2016 and Stela Yordanova - Queen of the World 2011. 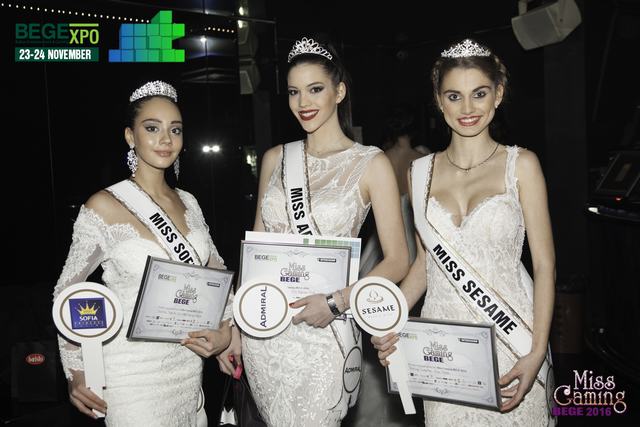 The first round of the beauty contest was held during the first day of the leading exhibition of the gaming and entertainment industry - BEGE Expo 2016 in Inter Expo Center, Sofia. The final round was at the after party of BEGE in a famous night club. General sponsor of the party was Casino Technology, golden sponsor - EGT, and silver - SUZOHAPP. The leading casino and gaming halls operators have made their selection between the 18 beauties participating in the contest. All the operators such as the online casino eCasino.bg, Eldorado Slot Club - Belgrade, Admiral club, gaming halls Palms Bet and Eldorado Bet, gaming clubs Sesame, CGI club, Gaming club Luxor, Queens club, gaming halls Mystic, WINBET, casino Hrizantema, casino Princess - Sofia, Palms Merkur casino, casino Royale Palms, Viva! Casino Sofia and the leading licensed bookmaker in Bulgaria – Eurofootball Had their own representative.

Visitors at the exhibition, as well as admirers of beauty, voted for their favorite contestant.Prizes were also given to the voters. .

The crowned beauties received many awards. St. Nicholas in Sandanski provided SPA weekend for two, SPA Demetra provided free beauty treatments and the Audience Favorite enjoyed dinner for two with a bottle of wine, provided by Wine Bar at the outskirts of Vitosha Mountain. Cafe Baristo, Magama, Wizzy Deal online store and Guerlain also prepared special surprises for the participants and the prize for the winner was a weekend for two in sunny Greece, provided by Ermia Hotels & Resorts. The winner received a crown and an annual subscription for Story magazine.

The contestants wore the refined dresses and wedding dresses by Christo Chuchev Design. Professional hairdressers from MAGAMA took care of the perfect hairstyles of the girls and their vision was complemented by makeup, provided by the french cosmetics company GUERLAIN.

Miss Gaming BEGE 2016 was held for the fifth consecutive year during the Balkan Exhibition of Gaming and Entertainment Industry - BEGE Expo. The exhibition, which was on 23 and 24 November 2016, gives an opportunity for meetings and business communication between companies in the industry.