The American Gaming Association looks back on 2020. By David McKee

Bleak.” That was American Gaming Association President Bill Miller’s one-word summation of the gaming industry’s 2020, the year that Coronavirus brought gambling to a grinding halt nationwide. First the bad news: Industry winnings fell to a level not seen since 2003. As for the good news, customers found different—and legal—ways to gamble, as online sports betting and Internet gambling boomed. Sports-betting handle was $21.5 billion, of which operators kept $1.5 billion, a climb of 69 percent from 2019. Meanwhile, I-gaming grew 1,990 percent, as it spread to new jurisdictions and as sheltering-at-home players turned to their computers and mobile devices in search of a fiddle.

The timing of Covid-19 could scarcely have been worse, nipping in the bud what promised to be the best first quarter (perhaps the best year) in the U.S. casino industry’s history. Gaming revenue fell to hairsbreadth below $30 billion, scarcely chicken feed but a shadow of 2019’s numbers, down 31 percent. Tribal gaming revenues have yet to be aggregated but will probably be 25 percent off 2019’s $34.5 billion. Casinos lost 27 percent of their business days (45,600 for the whole industry), with not one of 25 casino-enabled states posting a year-over-year revenue increase. “While gaming revenue fell, it’s remarkable it only dropped as much as it did. That’s a testament to our ability to reopen quickly and safely,” said Miller.

2020 came as an unpleasant jolt to an industry that had enjoyed five consecutive years of revenue growth. Also, with casinos reliant less and less upon gaming revenue and more on attractions (conventions, dining and entertainment, not to mention hotel rooms, no longer a loss leader), there was a double-whammy. This was especially true for Las Vegas, where gambling represents but 30 percent of the total revenue pie and where visitation plunged 74 percent. 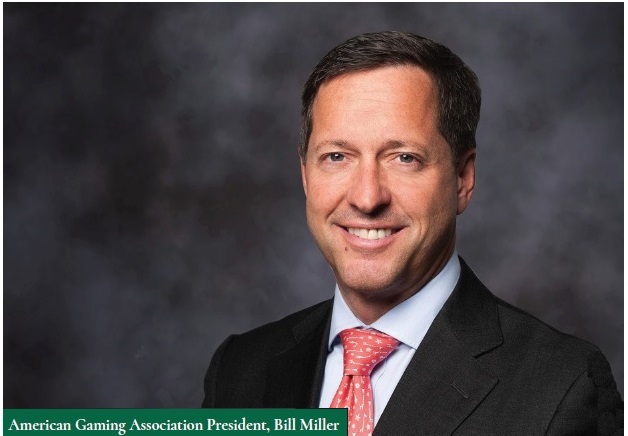 Hardest-hit was New Mexico, where casinos closed in mid-March and never reopened last year, leading to a 79 percent declivity. Least affected was South Dakota, which only shuttered its casinos for seven weeks and got off with a 4.5 percent dip in winnings. However, four states (Illinois, Michigan, Rhode Island and Pennsylvania) were hobbled by a second wave of closings as Covid-19 resurfaced in the fall. State and local governments were hurting, too, as the reliance upon gaming taxes caused them pain in the form of a 34 percent slide in revenues. That may just be a flesh wound. Reports the AGA, “It does not include the billions more paid by the industry in the form of income, sales and various other corporate taxes, nor does the total reflect payroll taxes paid by gaming operators and suppliers.”

All this pain and suffering concealed a few silver linings for the casino business. The surge in sports betting and i-gaming has already been noted. Casinos were also incentivized to move more speedily to a cashless gestalt. In Nevada, for instance, casino play can now be funded through digital wallets, thanks to a Covid-conscious regulatory change of heart. This trend is being followed in other states.

Not only was sports betting more popular, it also continued to expand its beachhead. The District of Columbia and five states (Illinois, Colorado, Michigan, Tennessee and Montana) went live and Tennessee, which had opted for an online-only sports betting model, saw particular success, although Michigan was fast out of the box, quickly becoming one of the nation’s top markets, while Colorado surprised many with the durable popularity of niche sports from the pandemic, especially table tennis (nine percent of the state’s handle).

In the 2020 elections, while the pandemic was still raging, gaming struck a decisive blow at the ballot box. In went six-for-six in statewide elections, an unprecedented success. Maryland, South Dakota and Louisiana all approved sports betting, voters in Nebraska legalized racinos, four Virginia cities out of four voted in casino development, whilst Colorado voters approved the expansion of game offerings and removal of loss limits. This was in keeping with AGA polling that showed a consistent increase of public sentiment in gaming’s favor.

In a few states, the introduction of new casino product softened the Coronavirus blow. Thanks to Encore Boston Harbor, Massachusetts was down only 23 percent while gaming expansions in Arkansas limited the pain to minus 16 percent. I-gaming was most prevalent in New Jersey ($970 million) and Pennsylvania ($566 million), although Michigan came on strong near the end. As terrestrial play resumed, slots—which could be physically sequestered—outperformed table games, where players and proximity were diminished by health precautions. Poker rooms were the biggest casualty and are just beginning to come back in some states.

At least the story has a happy ending. Gaming revenues in the regional markets quickly reached and even exceeded 2019 levels in 2021, culminating in April with the slow-to-recover Las Vegas Strip matching its 2019 tally. (Only Atlantic City still lags among the major markets.) A combination of federal economic-stimulus payments, high savings rates and long-suppressed demand is working in gaming’s favor. Could 2021 be the biggest year yet? It certainly is looking that way.