Blame it on the Air Force. Or maybe it was skydiving. Somewhere along the line, the thrill bug bit William Kitchen, turning him into a prolific inventor. It all began 30 years ago in his living room, with a model for a thrill-ride prototype made out of broom handles and G.I. Joe parts. “At the time, my girlfriend looked at this ride …and told me I was absolutely crazy,” Kitchen recalls. “Nevertheless I built one and people lined up all day to get on it. I patented it and it became Skycoaster, the fastest-selling ride in the world. They’re in almost every Six Flags park, every Cedar Fair park and smaller seaside parks, everywhere from Sweden to New Zealand.”

That was many thrill-ride inventions ago. Kitchen’s post-military career initially took him into radio but once the thrills caught hold broadcasting just didn’t have the same allure. His initial venture was into the bungee-jump business, “but the bungee business got a bad reputation, mainly because people were being very careless.” That’s when he started tinkering with broom handles and action figures. “I sold the Skycoaster company and all the franchising rights and decided to try something I thought was even more exciting and that was an indoor skydiving machine that would allow people to replicate the excitement of jumping out of an airplane.” That attraction became iFly, the indoor Skydiving attraction known worldwide. 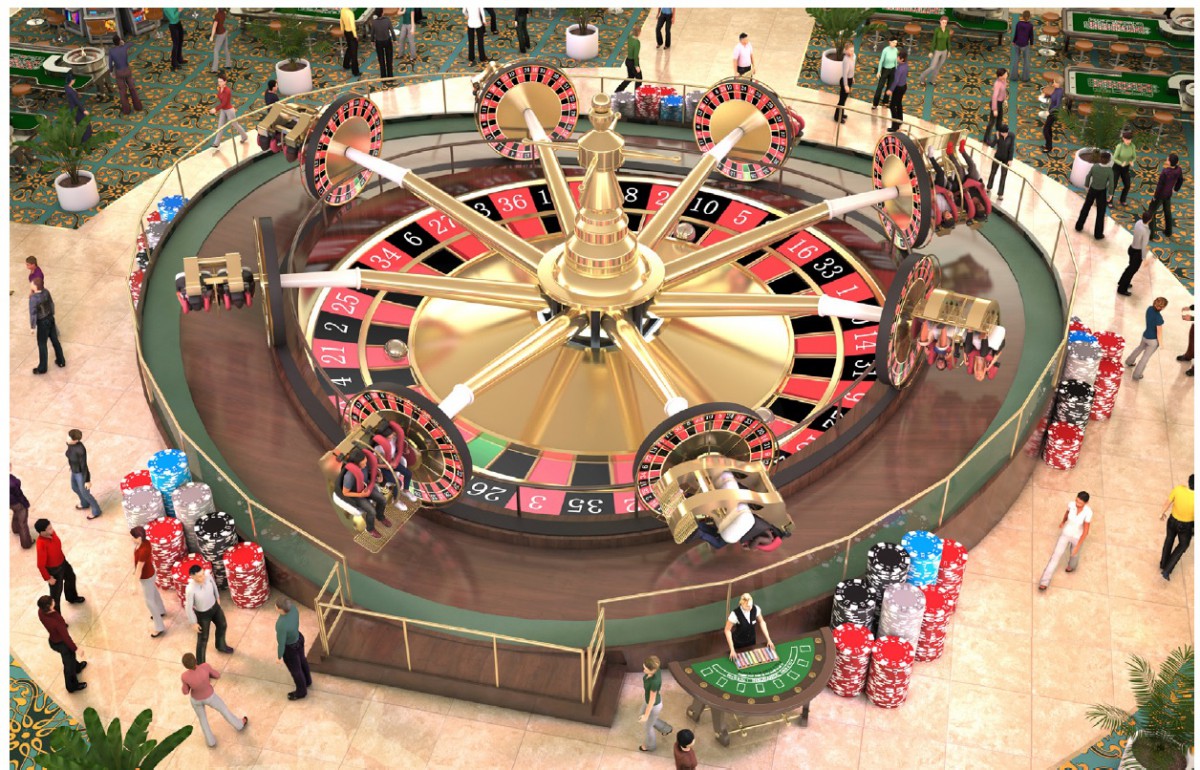 Again, success. Kitchen sold that second company and formed US Thrill Rides, whose products include the PolerCoaster (one was just approved in Orlando, Florida) where riders blast up to the top of a tower, then careen ‘coaster-style’ wildly down the outside. A sky shot and rollercoaster in one. A PolerCoaster was planned for the Tropicana Las Vegas but the casino has changed hands several times (as it is wont to do), putting the project on hold. In the meantime, Kitchen has found a way of combining the physical thrill of a rollercoaster with the mental one of roulette: the UniCoaster Roulette-Style, currently being developed for casinos. We caught up with him at his Florida headquarters.

What elements make for a good thrill ride?

We have a philosophy. Number one, it has to be safe. We never want to hurt anybody and although probably around 50 million people have ridden the rides I’ve invented, there’s never been any machine-caused fatalities or even serious injuries. Secondly, it must be fun and provide an experience instead of the same old thing people have been riding for a hundred years. Even the rollercoaster’s gotten bigger, faster and higher.

The UniCoaster is a completely new concept because it’s an interactive ride. What makes this so brilliant is that you’re sitting on a seat which is part of the axis of a large wheel. As the wheel spins, the riders themselves can control the action. There’s a handle between the two riders that both can grip, and they can choose whether to flip forwards or backwards and how fast. The harder you press the handle, the faster it will flip in either direction. In fact, it occurred during the early testing when a guy and his girlfriend began to have a disagreement on how fast this thing would flip. They gripped the handles so hard and fought over it so much they actually broke the handle. So we had to go back and redesign the handle so it would be people-proof when they’re fighting over the control. That’s part of the fun, by the way. One person says, ‘Let’s flip,’ and the other says, ‘No, no. No more.’ And the other one says, ‘OK, let’s flip backwards.’ 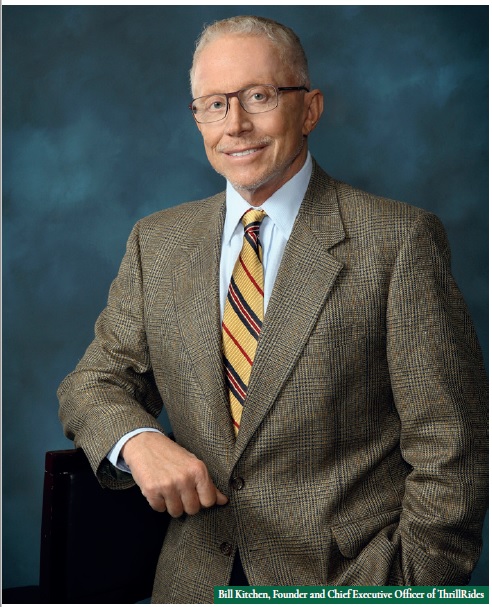 Is your typical rider more concerned with speed, inversion or something new?

Absolute speed is always part of it. People have made rollercoasters now that exceed 80 miles an hour. But they have to be very large. They cost tens of millions of dollars. What really creates the most fun is the changing of speed and direction and G-loads, and the UniCoaster provides all of that at a much slower speed.

How long does it typically take to develop a new ride?

It takes about three years from the time of the initial idea to where you prototype it, you determine that it’s safe and thrilling, and we always wind up building the first one ourselves and operating, because mall-park operators are always skeptical about being the first to buy something. The Unicoaster has been proven in several locations, but it is themed differently. One example is Nickelodeon’s “Brain Surge” at the Mall of America.

How is the UniCoaster able to offer rollercoaster-style thrills at 20 percent of the price?

Because it’s smaller. That’s an advantage because it will fit both indoors and outdoors. It’ll fit in a space that’s only 60 feet in diameter.

What is your favorite element of this coaster and why?

The interactivity, the fact that the riders themselves can choose the action of the ride. Every time you ride it, it’s different.

What was the inspiration for turning it into a giant casino game?

I had seen interesting and unusual themes that the buyers had already developed. I was looking for something even more exciting to do with the theming and I guess it was watching a roulette wheel at New York-New York in Las Vegas when I hit on the idea of theming it as a casino game. We started work on the idea and the theming, and then put one into production.

Along the way, I realized that there was a great potential here to create the first gaming machine that you could actually ride, that would combine all the thrills that had been proven on the UniCoaster but themed just like a roulette wheel. We created the concept, worked out the computer programming so that where it stops—and who knows where?—is chosen by a random-number generator. The first one is well under construction now at our factory. We will hopefully be able to ship the first one in December.

By what means does one ‘win’ when riding the coaster?

The variables are similar to what occurs when the ball rolls on a roulette wheel, except we have two variables. Number one: The giant, rolling wheel stops on the track on a certain number. It can be Red 24. Then, the very top of the wheel is shaped like a roulette wheel as well and so, when it stops, the pointer at the top will point toward the number. So you have two variables. Where it stops each time the ride is ridden and where the pointer points, which makes it a game of chance. 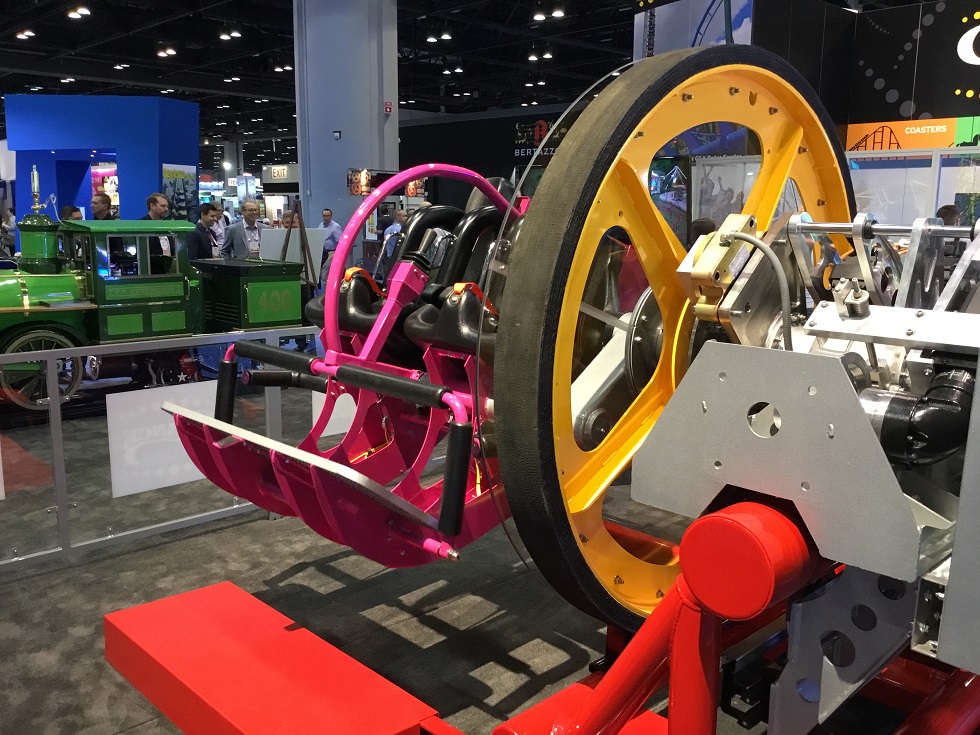 How often can you play this in an hour?

Fifteen rides an hour. The ride duration is 120 seconds. So that’s two minutes but it takes two minutes to unload the ride, load the next one, so the whole cycle takes four minutes.

Where do you intend to debut the game?

That depends on the first buyer. Our hope is by the time this first one is ready to ship we have several buyers lined up because when we sell our rides, we want the owners to have exclusivity in that particular market where they’re operating. We won’t sell a duplicate in that market unless the same owner buys it. Secondly, we use our patents to prevent anyone else from creating a ride like it. The actual motion and the shape of the ride are covered by worldwide utility patents. Then also there are design patents, depending on the theming of this ride. We’re able to control the distribution, like many other kinds of rides where one person buys one and it becomes successful, then someone else can’t buy one from a different manufacturer and give the UniCoaster much more competition. We think it’s better for the owner to have exclusivity in the marketplace.

Getting back to where the first one will be, we’re pretty excited about the fact that we’ll have several buyers before the first one is even shipped. Even if we didn’t, we’d just install one ourselves because it’s so profitable. Lease financing is already available. In a good location, the payback could be from 50 to 100 percent of the investment in the first year. 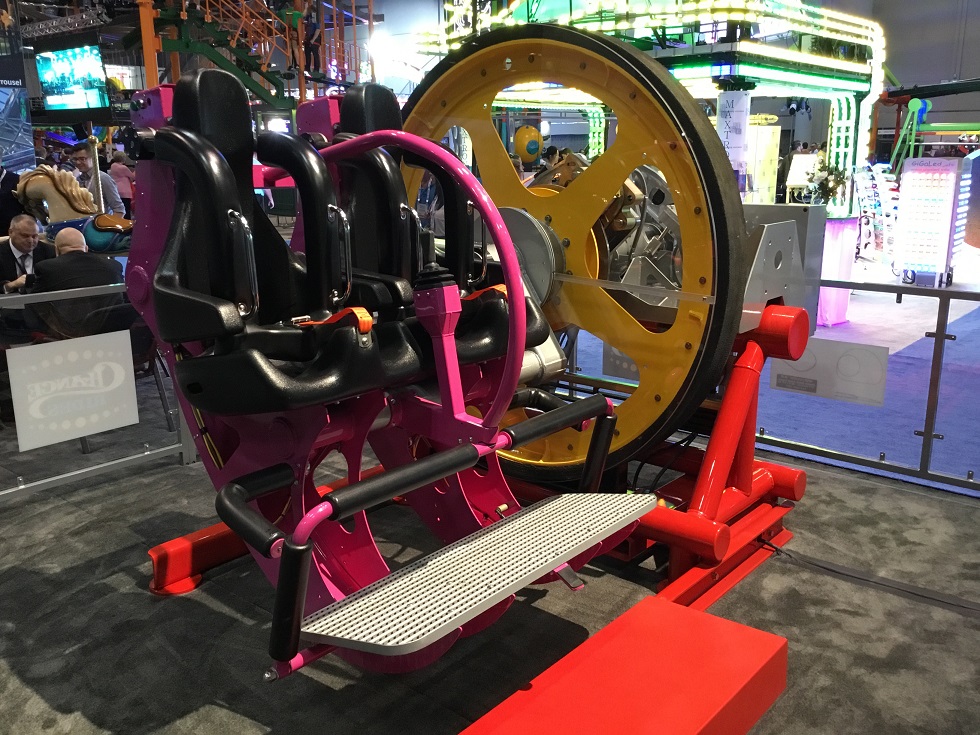 What regulatory approvals has it received at this point?

It’s not yet been approved as a casino game. That means that, particularly in Las Vegas, the approval is going to be expensive and it’s going to take a while. So we expect that, if it’s installed in Las Vegas, you won’t be able to bet on the outcome but the casino in a fun park-type location can offer a prize, like the world’s biggest teddy bear, without it having to be approved as a gaming device.

How is it compatible with the new mandate for social distancing?

That’s important. In fact, we have the spacing between the cars that are required by social distancing. We have also modified the ride with a shield in the back of each rider to reduce airborne-spread aerosols by a person screaming, and they do scream a lot on the UniCoaster! And, of course, to maintain social distancing you wouldn’t ride with a stranger. If you come with someone with whom you’re partnered or already married to or part of the same family, then you’re not concerned about sitting shoulder-to-shoulder on an amusement ride. 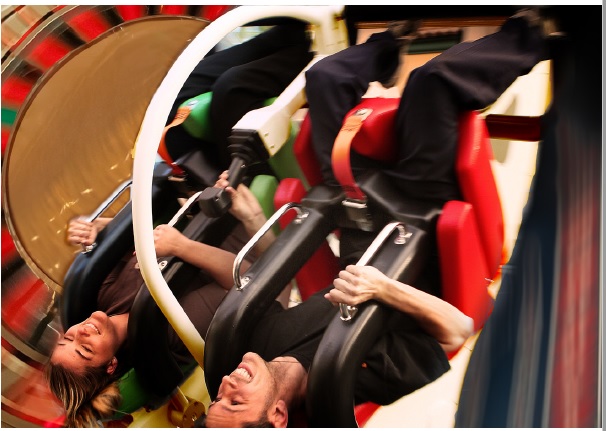 What is the status of your PolerCoaster projects in Las Vegas and Atlantic City?

It’s been a lot slower than we hoped it would be and a lot of it is due to the regulatory process. It’s also due to the fact that it’s very expensive. The Orlando PolerCoaster will—without any theming or buildings or land or anything else—cost $150 million. The Las Vegas and Atlantic City ones will be smaller but are still tens of millions of dollars. The processes of finding a location and fundraising sometimes takes years. We have licensed already those three markets and expect them to come online in the next few years. 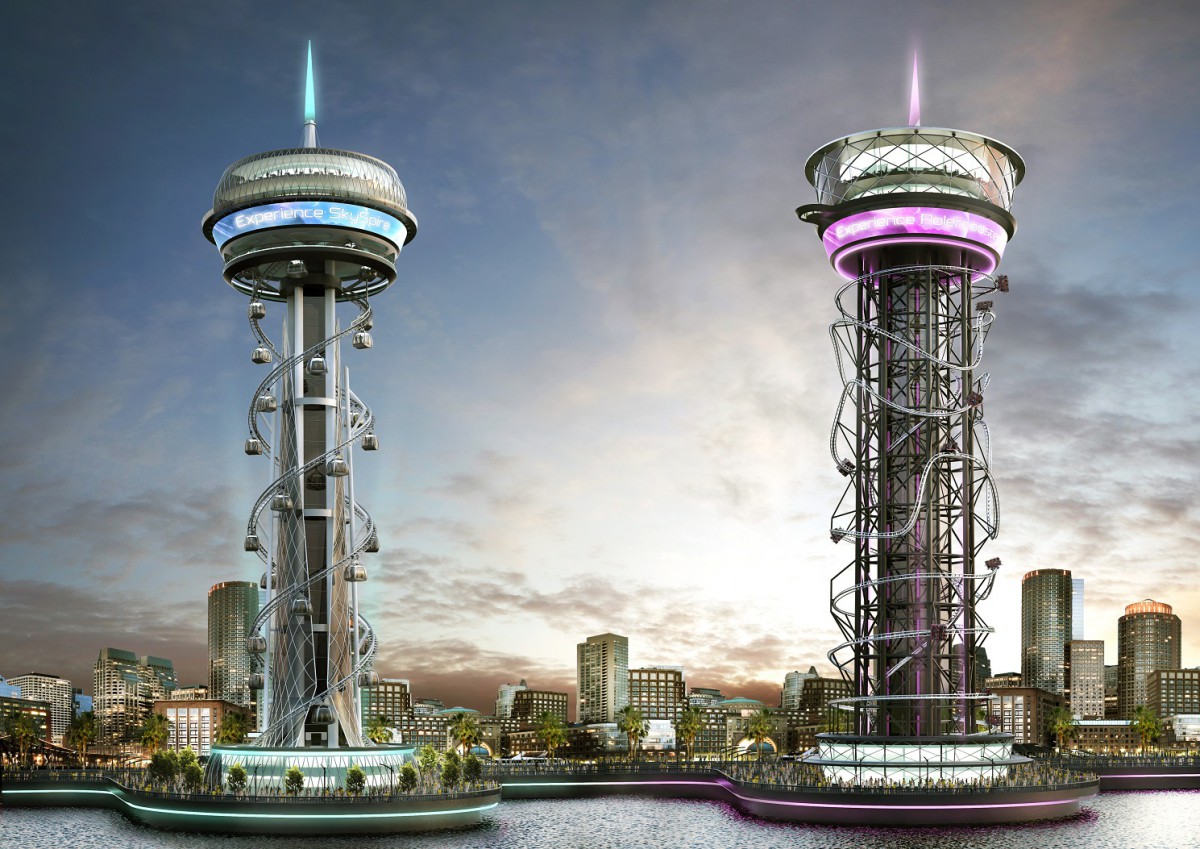 Is there something about the Unicoaster Roulette-Style that makes it particularly well-suited to gaming destinations?

Yes, they’re compact size and the fact that they look like a giant roulette wheel. That should add an excitement to the casino, whether it’s part of the gaming floor or hotel lobby, for example on Fremont Street, It would be an exciting draw to pull people in. You know how in Las Vegas for years they had all sorts of exciting things going on in the front of the hotels. There was the pirate-ship war at Treasure Island, for example. That attraction costs a fortune every year to run. So imagine a high-traffic location where the “roulette” UniCoaster provides excitement, and makes a profit! The patrons can enter from the front and exit right into the casino. It’d be fun to watch and be a big draw. 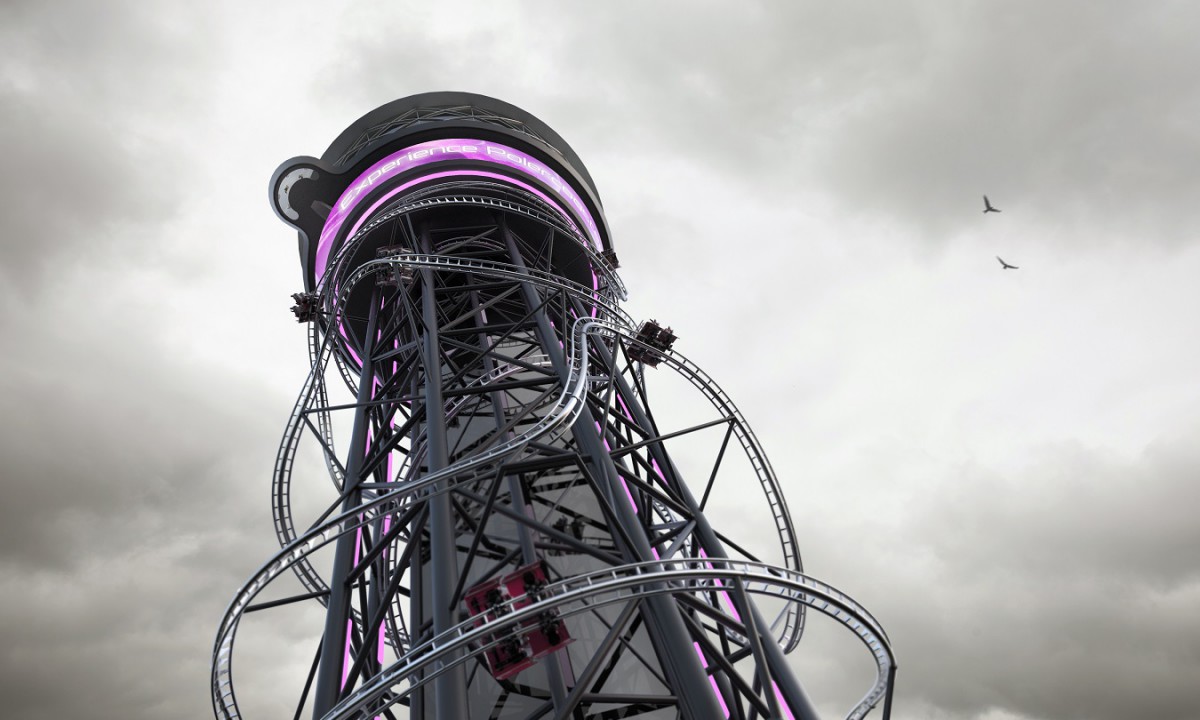