Save the Riviera! by Victor H Royer

This article is an appeal to Warren Buffet. Warren, loan me enough money so I can buy the Riviera, and save it. It won’t cost much – just about $200 million, or so. Maybe another $100 million for upgrades and operational expenses. If done right, this venerable old Star of the Strip can be rescued, and saved from the wrecking ball.

It is unfathomable to me that Las Vegas power-brokers have become so utterly stupid that they are systematically destroying and dismantling all that made Las Vegas great. And what are they doing to replace it? Building yet another series of bland convention halls, and a parking lot in the middle of the Strip.

So that Las Vegas can get even more conventions, populated by endless streams of conventioneers, almost none of whom gamble. 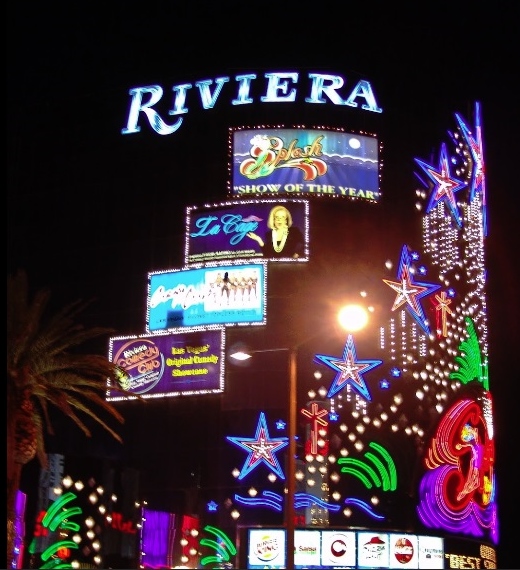 Now – if at least most of the people who attend a convention in Las Vegas would gamble like this, then I wouldn’t be all that upset over the death of the Riviera. After all, if we tear it down, and build another convention hall, maybe – just maybe – out of all the tens of thousands of extra
Save the Riviera! – © Copyright 2015 by Victor H Royer. All rights reserved. conventioneers we might get another one like Mr. Smith. Perhaps we may even get a Mr. Jones. And if all goes well, maybe we can even get three or four of those conventioneers to gamble. Something.
But these aren’t the actual facts.
You see, this Mr. Smith is not a measure of the reality rule. He is what is commonly known as “an aberration”, meaning one of the few conventioneers who actually visit a casino, and then actually play in it.
But what about the rest of the time? The rest of these tens of thousands of conventioneers? And that’s precisely the problem with this kind of thinking that’s prevailing among the powersto- be that now control Las Vegas. They just don’t seem to think things all the way through. At least not like casino owners and operators should be thinking.
Instead, they should be thinking like this:
In the dining room, we’ll get, maybe, $18,000 profit out of that $300,000. If we’re lucky … but since $100,000 of that is our own money, we actually get a lot less.
However, if we focus Mr. Smith, and others like him, on the casino, we’d be getting anywhere from $60,000 to $120,000 in profits for the same action – and with less labor cost, and in a much shorter time. Therefore, it is in our best interest overall, to get Mr. Smith – and others like him – to pay more attention to the excitement of the casino, than to the convention.
Mr. Smith is of far greater value to us as a casino player – and of very little value as a conventioneer – regardless of how much he eats. So, why are we wasting our time and money attracting people who sit and eat, instead of casino players who sit and gamble? (Remember – Mr. Smith is an aberration, not the measure of the rule.)
Why are we going after conventions, which are common to every city in the world, instead of going after gamblers? And why are we tearing down great and iconic Las Vegas landmarks just to stuff more traffic onto an already overcrowded Strip, and populate it with even more people who don’t gamble? 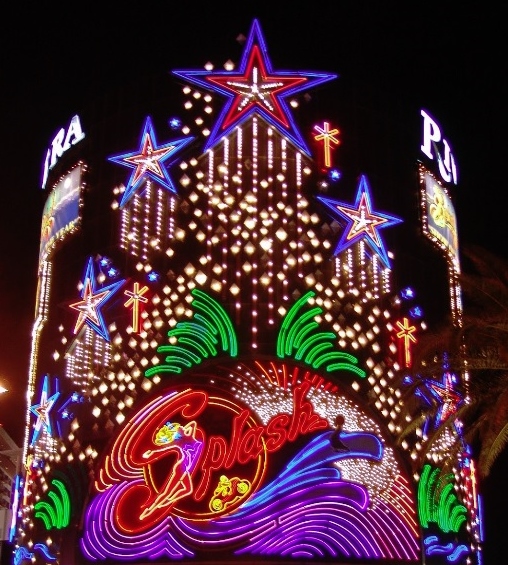 But this might be a hard argument for me to win at this particular moment, and with this particular example. While Mr. Smith did actually gamble in the casino, the casino made no money out of it (because he won). However, the restaurant did make some money out of him, even if 1/3rd of his exorbitant food bill was actually paid for by the casino’s own money. I guess the bigger question should be this: How many of the other 25 guests that Mr. Smith treated to those $15,000 bottles of wine
actually gambled in the casino? And another question should perhaps be: How many of all the other attendees of the Consumer Electronics Show did also gamble in the
casino? 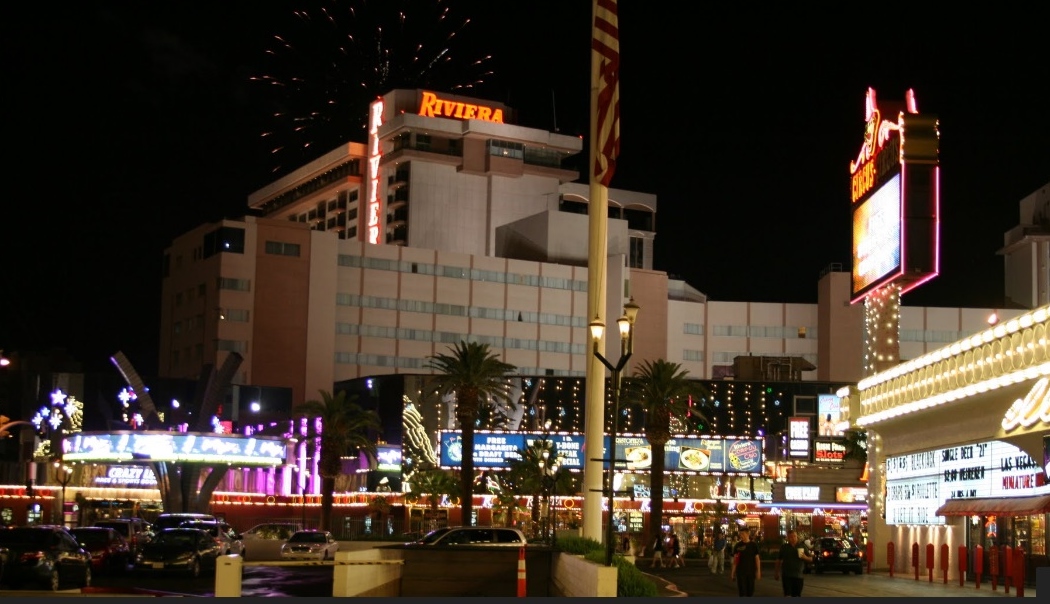 Did any of them gamble? Anything like Mr. Smith? Was there a Mr. Jones among them? You see, the facts are simple – conventioneers just do not gamble. Period. And while Mr. Smith may be a maverick who has more than the “vice” in Vice Media Inc., to his credentials, the simple facts are that conventioneers like him aren’t usually found in the casinos.So, how does this affect the Riviera? Well, I guess it’s all a matter of perspective.Destroying Las Vegas, tearing it down, shredding it to pieces, putting up endless rows of bland convention halls, parking lots, drugstores on every corner of the Strip, and more and more shopping malls and high-rise residential units.Is that the perspective we really want for Las Vegas? And what about the casinos?

Oh, yeah … you mean those annoying things that waste floor space where we can stick another convention hall? Oh, don’t worry … we’re on top of that one. We’ll be tearing it all down soon enough.
And so, now comes the death of the Riviera.

As if it wasn’t enough that everything that was once great about Las Vegas has already been destroyed. Now one of the few surviving great icons of the greatness of Las Vegas is being bought by the Las Vegas Convention and Visitors Authority (LVCVA), and they are going to tear it down, shred it, destroy it, bury it. And then do what?
They are going to replace it with yet another convention hall for what they are calling “The Global Business District.” And what will this do?
It will attract more conventions flooded with people who don’t gamble. Yes, it will pump around $300 million per year into the “non-gaming” economy. But the casinos – even when run badly – still pump more than $1 BILLION into that same economy every month! So, what else will this “Global Business District” do for Las Vegas?
It will increase traffic jams and pack the strip with business suits instead of gamblers. (Mr.Smith and his Blackjack prowess notwithstanding.) It will drive away visitors who come to see and experience “Las Vegas”, and now, instead, will find bland convention halls, Bus depots, and parking lots.

This is already happening. Have you been to Las Vegas recently? Have you seen the destruction of all that was once great? The Strip is packed with Palm trees, which do nothing to “beautify” the Strip. All they do is block the neon. What little is left of it, that is. Palm trees are synonymous with Hollywood, and California, and Beverly Hills. Las Vegas used to be famous as “The Neon Jungle.” But now, after these power-brokers who are destroying it get through with their heavy-handed and misguidedmayhem,

Las Vegas will instead become known as “The Boulevard of broken dreams, once great and shining with bright lights, and now buried in the dust of dull and grey convention halls.” So, Mr. Buffet, loan me the money, so I can save the Riviera. At least one of the great casinos of yesteryear deserves to be kept shining.
And, oh, by the way – if you’re wondering how the thinking is going among casino owners and operators who ignore the casino – in the fourth quarter that ended Dec. 31, 2014, MGM Resorts reported a net loss of $342.3 million, compared with a loss of $56.8 million in the same quarter a year ago.

The result translated into a loss per share of 70 cents, compared to a loss of 12 cents per share last year.
So, who’s the winner here?
No one.
And that’s the real cost of short-sighted thinking that’s destroying Las Vegas.
Save the Riviera!
At least do something right – for once.

Victor H Royer is President of Gaming Services & Research. He is a 32 year veteran of Las Vegas gaming, a 25 year consultant to the gaming industry, and author of 40 books on casino games and gaming. In addition he has researched and authored more than 300 industry reports on the subject of player preferences, marketing, player development and customer relations, and published over 4,000 articles on casino games and the casino industry. He can be reached at: DrVHR@aol.com