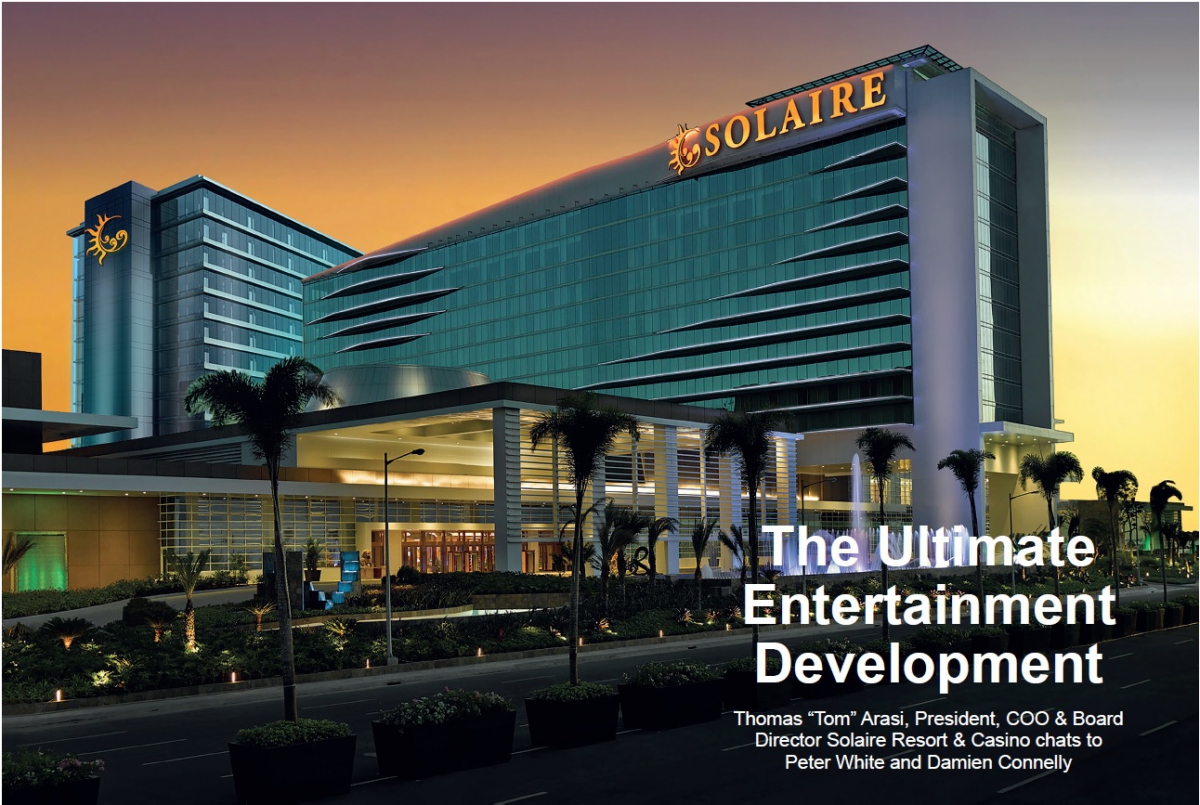 You have held noteworthy positions at several companies during your career. Please tell us a little about yourself and how your experience has brought you to Solaire Resort & Casino.

Until 2009, my career was focused on hospitality (the ‘other’ side of Integrated Resorts) in most facets of property-level and corporation operations, branding and real estate and investment. That was really good. It got great in 2009 when I 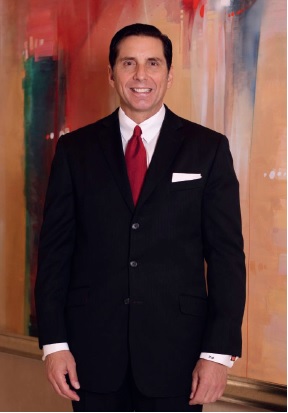 got into the Integrated Resort (gaming) business with Las Vegas Sands Corp at Marina Bay Sands, Singapore. Nothing, in my opinion, is as dynamic and exciting and all-consuming as the gaming-Integrated Resort business. Now, at Solaire Resort & Casino, I’m privileged to be involved in the most exciting thing ever.

Prior to joining Solaire Resort & Casino, you were President and CEO of Marina Bay Sands, which has quickly become one of the world’s most iconic Integrated Resorts. What differences and similarities exist between these IRs and doing business in each respective country?

The similarities are striking. Although both Singapore and Manila were not new to gaming per se, both were new to land-based casinos developed on the back of multi-billion dollar investments on a single asset basis through new government-sanctioned, gaming-enabled legislation. Both markets are creating a new paradigm that is taking tourism, entertainment and hospitality to heights never before seen in their respective countries. Both Marina Bay Sands and Solaire Resort & Casino are iconic, real estate works-of-art that are achieving unprecedented economic benefits for their resident communities, government coffers and investors, and raising positive awareness of their countries—the Philippines and Singapore. Both serve their local populations, and, of even greater import, attract visitors and players from all over Asia and the world for that highly-desired foreign tourist visitation and spend. 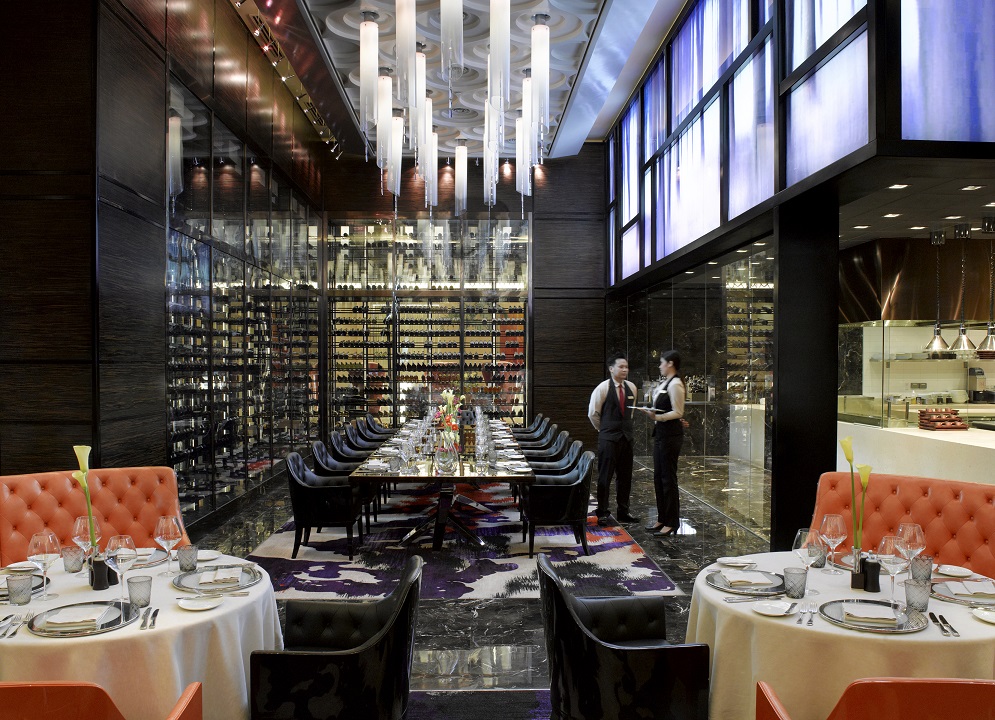 Solaire Resort & Casino was the first IR to open in Entertainment City, which is planned to have a total of 4 IRs operating within a few years. What benefits have accrued from being the ‘first-mover’?

Being first-mover has allowed us to identify and cement loyalty with the best customers early and strongly, and to define success in the marketplace. Our Chairman and Founder—Mr. Enrique K. Razon, Jr.—had a crystal clear conviction of true luxury and best in class property and service and that is what Solaire is quickly becoming known for…as the Integrated Resort experience in the Philippines. Being first-mover is allowing us to help shape the image of the Philippines and the Integrated Resorts here as compelling and highly desirable…and to allow Solaire to be the leader in the minds of customers. Let’s not forget, also, that as first-mover, in my opinion, it has given us the “pick-of-the-litter” in getting the best Team Members.

What were your first impressions of Solaire Resort & Casino, and how have those altered during your time there to-date?

Firstly, it is luxurious, warm and sophisticated all at the same time. Solaire in terms of quality, facilities, amenities, style and aspiration is equal to or greater than the top Integrated Resorts anywhere in the world. That is a big statement…but one becoming quickly recognized as true. Secondly, the layout and design of Solaire is outstanding. It has fairly large scale but it feels intimate, approachable and comfortable to the guests. Players love the feel of the floor; the F&B is correctly positioned and the way the place works feels more like a big palace than it does a cavernous casino. Thirdly—without question—Solaire has the best back-of-the-house of any property that I have ever seen.

Real planning and care and investment went into the BOTH If you were to position Solaire Resort & Casino against other, perhaps better-known and longer established operating companies/properties, who would you position yourself against? For example, are you a Wynn, a Marina Bay Sands, a Crown Melbourne…?

Ha-ha, I will leave that for others to make comparisons…we often hear one or two of the names that you’ve mentioned above from customers and industry-insiders alike…but, we’ve developed and continue to fortify an identity and niche all of our own. Further to this point, we can take these comparisons and do even better because, in my opinion, we offer the best service that you will find in any property globally. Our “secret sauce” is ‘famous Filipino’ hospitality, warmth and friendliness. For decades, talented and motivated Filipinos have been serving the leading properties across the globe. Now they are coming home to the Philippines and Solaire Resort & Casino. On the ‘people front,’ I don’t think that anyone will be able to compete with us, once we fully hit our stride.

What are your objectives for Solaire, and how are you achieving them?

People often say that ‘Solaire is the best in the Philippines.’ I’m humbled when they say and think that. Our goal, however, is to be considered top-of-mind, unprompted among the elite Integrated Resorts anywhere—Asia, USA, Europe—in addition to the Philippines. Commercially, we want to be a balance between VIP and mass, tables and slots and domestic versus foreign activity. This is very similar to the Singapore model and that builds sustainable and solid, long-term shareholder value. Of course, generating a high return on investment is critical. 2014 was a good year for that as ebitda was up more than eight times versus the prior year.

What are your greatest challenges at Solaire, and how are you overcoming them?

Our main challenge is marketing in the macro sense. Tourism to the Philippines lacks the awareness of other more established Asian inbound markets and there have been some public relations issues regarding travel to the Philippines. However, once people come here, we benefit from very high “stickiness,” having a very, very high chance of getting them back because the property and service are so good. We are quickly overcoming some perception challenges, but not through traditional media. We’re attracting more and more foreigners through our sales force who have or are developing relationships with key customers, and, through their personal relationships, getting those customers to give us a try.

November 2014 saw the opening of your Phase 1A expansion, with the Sky Tower leisure complex consisting of hotel, additional VIP gaming areas, F&B and MICE facilities, as well as The Theatre. In other jurisdictions, non-gaming is an increasing revenue source. How is the balance between gaming and non-gaming developing in the Philippines market, and within Solaire’s operations?

Our Phase 1A which we call Sky Tower is a dramatic inflection point for us in terms of serving our guests. It is very different than Bay Tower but doesn’t feel like a different property. It is mostly non-gaming. Non-gaming is becoming more important here as it is in most other jurisdictions. Therefore, as you correctly say, it is becoming more important. Having said that, the ‘gaming versus non-gaming’ discussion has lost a little perspective, I think. Gamers live off of the non-gaming/hospitality fun, enjoyment and amenities. Baccarat is baccarat and slots are slots…all with some differentiators, but those differentiators are at-the-margin. If you took away the hospitality and didn’t offer the non-gaming you would have a lot less gaming revenue. It’s not as divorced as the industry discussion sometimes makes out to be the case.

Could you tell us a little more about your future plans for Solaire Resort & Casino?

Our Phase 2 will again almost double our size and be a true game-changer—more hotels; more retail; more F&B; more MICE; another casino; and more entertainment. Although no firm plans yet, we have the land and basic infrastructure in place so if and when the time is right in the discretion of Mr. Razon, it’s a relatively seamless “bolt-on” development opportunity. As you may know, we have acquired The Hotel/LVegas hotel-casino in Jeju, Korea and a vast amount of outstanding land in Incheon. Korea is obviously a future market for us. 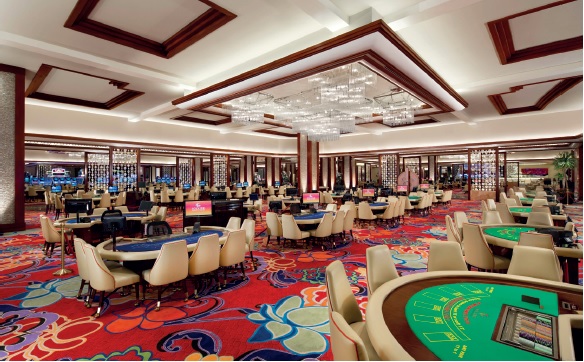 Finally, if you were able to go forward in time by 10 years, what would your ideal future Solaire Resort & Casino look like and be achieving?

Solaire would be globally recognized as one of the very top choices for an Integrated Resort experience with the brand “Solaire” standing for beauty, timelessness, luxury, hospitality, aspiration, life-style and fun and entertainment. We would attract customers globally and be represented with high-quality assets in several countries in Asia and the rest of the world, allowing us to be the leader in the Philippines as well as having one of the larger shares of the global gaming wallet. Those accomplishments would manifest themselves in strongly growing profitability, financial returns and a pleased shareholder base as well as guests and Team Members alike who closely identify themselves with Solaire and the values for which we stand.