Sands China Rises to Record After Earnings Beat on Cotai 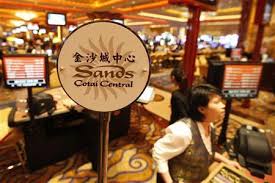 The stock rose 9.2 percent to close at HK$58, the highest level since its November 2009 listing. The shares have climbed 71 percent this year, compared with a 3 percent gain for the city’s benchmark Hang Seng Index.

“Sands has been very strong, especially on the mass-market segment,” Grant Govertsen, a Macau-based analyst at Union Gaming Group, said by phone today. “The company has the biggest footprint in non-gaming entertainment which helps to draw a lot of family holiday-makers.”

Adjusted property earnings before interest, taxes, depreciation and amortization increased 62 percent to $785.3 million in the third quarter, the company said in a stock exchange statement. That compares with an average estimate of $732 million from 10 analysts compiled by Bloomberg.

“The sector is on fire again,” Govertsen said. “Even the second or third-tier Macau related stocks are enjoying the strong momentum.”