Rain Cheque: Latest Buzz Bingo Winner Almost Missed Out On Over £170,000 Jackpot If It Wasn’t For The British Weather

Buzz Bingo, the UK’s largest retail Bingo operator, has announced the winner of a life-changing £169,046.81 jackpot, plus a £2,500 Full House prize in-club, after the prize money was rolled over for a total of 32 days.

Thirty-three-year-old Gareth Bedford, from Southampton, took home the combined winnings of £171,546.81 on 14 August 2019. He won the Rollover Jackpot on the number 55 while playing with his dad, Peter Bedford and sister, Claire Kassimy at his local club, Buzz Bingo Antelope Park, in Southampton. 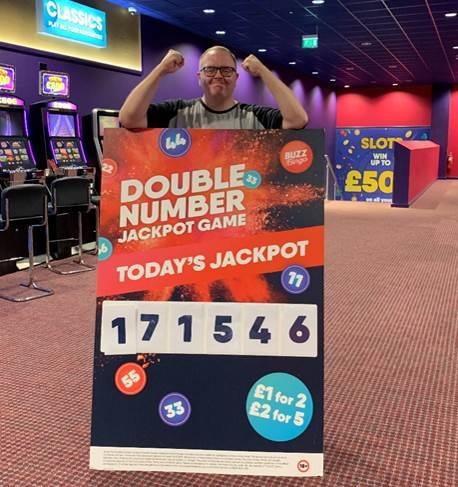 But Mr Bedford nearly missed out on the mammoth prize as he was supposed to be enjoying a day at the races. Luckily, their plans changed due to the rain and Mr Bedford, along with his father and sister, decided to enjoy an evening of Bingo instead.

A regular at Buzz Bingo’s Southampton clubs, Mr Bedford said: “I am ecstatic and shocked to have won such a life-changing sum of money. When I called ‘house’, I hadn’t realised how long the jackpot had rolled over for. What I thought was a normal £2,500 win turned out to be over £171,000! I couldn’t quite believe it and when someone told me, I burst into tears of joy and bought all the other players a round of drinks to celebrate.”

Now, Buzz Bingo will be hosting a party held to celebrate the lucky winner taking home the £171,000 prize. The party will be held in the Antelope Park club, in Bursledon Road, on 31st August at 6:45pm with a glass of fizz for guests on arrival and a Cher tribute at 9:30pm to get the party started. Players will be able to celebrate with a £5 main event with a last house prize of £200.

He added: “I will be sharing half of the winnings with my dad and splitting the other half with my sister.

We’d like to share a huge thanks to the Buzz Bingo team. Paula and the rest of the staff made us feel like royalty and we enjoyed an impromptu party in-club immediately after the win!”

Paula Joynson, General Manager at Buzz Bingo’s Southampton Antelope Park club, added: “We couldn’t be happier for Gareth’s incredible win! The Double Number Jackpot is still quite a new game to Buzz Bingo so to see someone in our club win such a huge jackpot this early in is phenomenal. We are very much looking forward to celebrating Gareth’s win with our other members at our party night at the end of the month.”

Members flocked to Facebook to share their congratulations for Mr Bedford’s big win, including other players who had been in-club when he realised his luck.

The Double Number Jackpot is a Link Game where Buzz Bingo clubs play join up to play together for the chance to win even bigger prizes. To win the Double Number Jackpot, players must call Full House on a double number, for example 11, 22, 33... The Jackpot will now reset at £5,000 and roll over every evening it is not won. Gareth is the third person to take home Double Number Jackpot prize, following a £12,364.38 win on 11 July and £11,960.38 just two days later, on 13 July.

This win adds to the incredible £3.9 million average won in club by members each week, with £400,000 a week won online.

Buzz Bingo’s cross-generational community numbers over 1.1 million active club members and each week 119 clubs welcome 200,000 players through their doors to enjoy bingo, play slots games and experience a great night out.   Members win an average of £3.9 million per week in Club with £400,000 a week won online.  With the game enjoying renewed popularity amongst new, younger players, the brand is well-positioned to get the British public to fall in love with bingo.

buzzbingo.com captures the in club feeling of playing among friends, allowing people to play together, anywhere via their mobile, tablet, desktop or on Touchpads in all clubs. Much like in club, buzzbingo.com is proud of its responsible play ethos and unlike most gaming websites, there are no wagering requirements at buzzbingo.com so players can withdraw their winnings instantly from any cash or bonus stakes.

Backed by Caledonia Investments plc, Buzz Bingo runs its clubs and website from its Nottingham and London headquarters.