Plan for £25m hotel and casino in city centre

It would result in shops at ground and first-floor levels, around 1000sq m of leisure space on the second floor, a spa and further leisure space on the third floor, a hotel with 96 bedrooms over the fourth to ninth floors and a double height public bar on the 11th floor. The plan also involves using part of the basement as leisure and bar space. 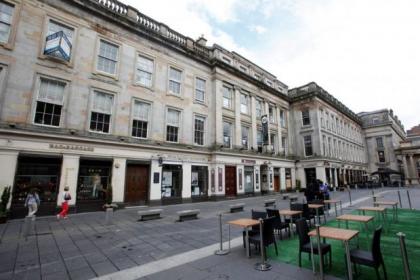 The intended opening hours of the bar and leisure facilities are from 8am until 3am with the shops opening from 9.30am to 8pm.

The development in the Central Conservation Area would result in A-listed buildings being modified and B-listed buildings being partially demolished. Richard Brown, Glasgow City Council's executive director of development and regeneration, has recomm-ended it gets full planning permission. He says in a report: "The current proposals represent a very significant regener-ation opportunity."The proposals would make use of part of the vacant and derelict land within the city centre and would deliver successful regeneration of a key city centre site. "They would also attract economic activity by providing 250 direct jobs."The development will deliver significant economic benefit to Glasgow in a number of ways. "Firstly, it can generate additional taxes and rates at both a Glasgow City Council and at a national level. "Significantly, it will deliver a positive boost to the economy through much- needed jobs. "One of the findings of the independent economic impact report is that the retail aspect of the proposals will augment the offering on Buchanan Street and the Style Mile rather than competing with it."

Objectors have raised concerns about the pressure the development, proposed by leisure and property millionaire James Mortimer, would put on police. But Mr Brown says: "There have been anti-social issues surrounding this site, although these are a symptom of its current condition and vacancy."

It is understood many of premises in the area of the development, from Royal Exchange Square to Spring-field Court are lying empty.