On Saturday, Flamingo Amusements at Hastings Seafront - part of the Luxury Leisure Talarius group - hosted a VIP fun day with local families who have been granted a wish by children’s charity, Rays of Sunshine. The event was in celebration of the national fundraising scheme – Tickets2Wishes – which is run by bacta, the UK’s trade association for the amusements industry, to raise funds for Rays of Sunshine. Local MP for Hastings & Rye, Amber Rudd, also attended the event.

As part of the event, families who have been supported by Rays of Sunshine enjoyed a day out at Flamingo Amusements. A cheque was also presented to the charity as part of the Tickets 2 Wishes scheme, from funds raised by all Luxury Leisure Talarius seaside businesses across the country so far in 2019.

Tickets2Wishes is a national scheme that enables customers visiting Flamingo Amusements and many other locations around the country to donate any leftover Prize tickets to Rays of Sunshine, which are then used to brighten the lives of seriously ill children across the UK by granting wishes and providing ongoing support within hospitals. 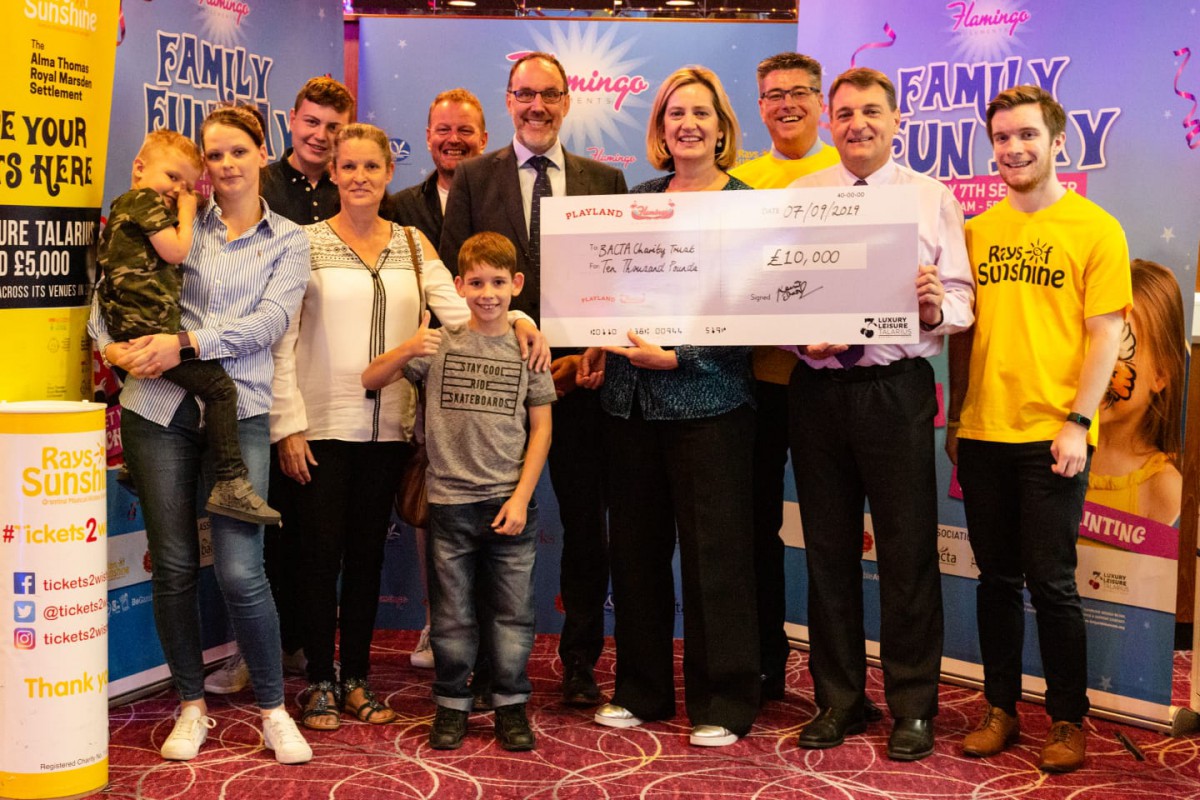 Four-year-old Khodi and 15-year-old Samuel both attended on Saturday with their families. Rays of Sunshine recently granted Khodi’s greatest wish to go to Disneyland Paris, whilst Samuel is set to visit Disneyland Florida later this year!

Bacta is a long-term charitable supporter of Rays of Sunshine. To date, bacta members have raised £500,000 through its charitable trust and granted the wishes of 21 seriously ill children across the UK with its Tickets2Wishes’ fundraising scheme in aid of the children’s charity.

Amber Rudd, MP for Hastings & Rye, said: “Tickets2Wishes is a fantastic initiative set up by the bacta charitable trust to raise funds for Rays of Sunshine. It’s been an honour to join Khodi and Samuel this weekend for their VIP family fun day, and to see just how this initiative is helping families and children living with such difficult conditions.”

Jane Sharpe, CEO of Rays of Sunshine said: “A huge thanks to Flamingo Amusements for hosting such a fun-filled day for Samuel, Khodi and their families this weekend. Family days out like these give our families the chance to create special memories and spend quality time together. We are so grateful to the bacta charitable trust and its members for supporting the Tickets2Wishes fundraising scheme. It is only with the support of our valued partners, like bacta, that we can continue our work to brighten the lives of seriously ill children. Thank you to all of the customers who have donated their tickets to grant magical wishes”.

James Miller, President of bacta said: "Tickets2Wishes is a fantastic charity initiative that helps bacta members and their customers from around the nation join together and support the great work of Rays of Sunshine. Bacta members provide fun and entertainment to millions of friends and families each year and by donating through the Tickets2Wishes scheme we can all grant some fun and amazing memories to deserving Rays of Sunshine families across the country.”

Kevin Dixon, Area Manager for Luxury Leisure Talarius said “We are excited to host this VIP day in Hastings and plan a special day for these two families.  We collect tickets from our six seaside arcades across the country, and this year’s donation figure looks to be in excess of the £5,000 we raised last year – we will reveal the amount on the day!”

About Rays of Sunshine

Rays of Sunshine Children's Charity was formed in 2003 to brighten the lives of seriously ill young people and their families across the UK by granting wishes and providing ongoing support in hospital and within the community. www.raysofsunshine.org.uk. Over 6,500 wishes have been granted since the Ray of Sunshine Children’s charity was formed and their work has touched the lives of more than 60,000 children and young people, not to mention their siblings and parents. Rays of Sunshine has appointed its first Health Play Specialist at University London Hospital and is proud to be a part of such an amazing cause.

Bacta is the trade association for the UK’s amusement and gaming machine industry. It represents the interests of over 500 companies and 34,000 employees, among those who manufacture, supply and operate amusement machines. Its members, who range from large manufacturers to suppliers of machines, and the owners of seaside Family Entertainment Centres and over-18 Adult Gaming Centres, have a collective turnover of £1.6 bn. with a contribution to the economy approaching £2 bn. For further information, visit: www.bacta.org.uk