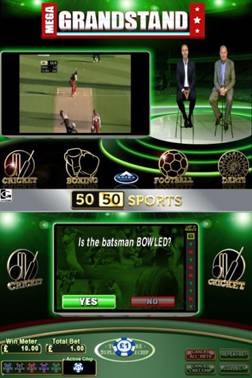 LONDON, UK – Monday, February 03, 2014 – 5050Sports will bring two of England’s biggest sports stars to ICE Totally Gaming 2014 as it launches its partnership with Astra Games Ltd, a subsidiary of the Novomatic Group of Companies.

The unique agreement will see Astra Games utilise 5050Sports as a bonus double-up feature in the exciting new land-based slot Mega Grandstand for the UK market.

World-renowned duo Owen and Vaughan front, and are immersed in, the football and cricket versions of 5050Sports, which also has a boxing variation starring Ricky ‘The Hitman’ Hatton and a darts theme with Simon ‘The Wizard’ Whitlock.

Players enter the feature when winning £10.00 or higher on Mega Grandstand. The 5050Sports game is presented by popular broadcaster Jim Rosenthal alongside one of the four personalities from the virtual studio as they interact with players who wager on the outcome of the upcoming, officially licensed archive sports video footage.

“We have very high expectations for Mega Grandstand featuring 5050Sports,” said Zane Mersich, Astra Games managing director. “The 5050Sports element is so simple to play and, featuring memorable highlights and some of the biggest names from the world of sport within the product, it is a totally unique proposition for players.”

“We are incredibly excited to be working with the team at Astra Games and to be launching 5050Sports into the land-based environment after its previous online success,” said Stuart Carr, CEO of Real Sports Global and founder of 5050Sports. “As part of the Novomatic Group of Companies, this is a major agreement with huge potential for 5050Sports. We look forward to demonstrating Mega Grandstand featuring 5050Sports at the show, with help from our special ambassadors, Michael Owen and Michael Vaughan.”

“This agreement gives players more chances to engage with the game and I am sure they will enjoy playing it as much as I do,” Owen added: “I have thoroughly enjoyed being involved in 5050Sports and look forward to promoting it at ICE Totally Gaming 2014.”

5050Sports is proving to be successful online since the standalone version of the game launched with BetVictor at the end of 2013. Real Sports Global also has additional, exclusive archive video rights from a range of sports federations, including Premier League snooker, top-level golf, poker, greyhound racing and motorsport among others, for use in 5050Sports.