Prior to this assignment, Colonel Callahan served as the Deputy Superintendent of Administration and has also served as the Commanding Officer of the Emergency Management Section and was the Recovery Bureau Chief in the wake of Super Storm Sandy where he was responsible for working with FEMA, all State Departments, county and local government entities, as well as the Governor’s Office of Recovery and Rebuilding to administer and oversee the $1.5 billion in FEMA Public Assistance and Hazard Mitigation funding awarded to the State. 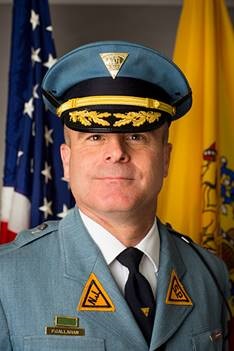 Colonel Callahan also served as the Chief Financial Officer for the New Jersey State Police and has held various assignments in the Administration Section overseeing budget and fiscal responsibilities associated with the Division. He assisted in the planning and distribution of the federal homeland security funding awarded to the State and its 21 counties in the wake of 9/11.

“The Community Hero is someone who truly stands out in our region for the work they are doing to serve and protect others,” said Joe Lupo president of Hard Rock Hotel & Casino Atlantic City. “We could not be more grateful to have Colonel Callahan join us during this special event where our region will come together and show our collective support celebrating America and our heroes.”

In addition to naming a Community Hero for the “Celebrate America Parade,” Hard Rock Atlantic City is proud to announce today that the Press of Atlantic City will sponsor the patriotic event.

Parade attendees will be able to get a full play-by-play during the parade that will be emceed by traffic Reporter Bob Kelly of FOX 29 News, Good Day Philadelphia.

The ninety-minute parade honoring heroes will take place on the Atlantic City Boardwalk, stepping off at Metropolitan Avenue and concluding at Arkansas Avenue. The parade will span a 1.4-mile-long route where spectators are encouraged to bring American flags, lawn chairs and blankets to watch the family-friendly parade.

The ninety-minute parade honoring heroes will feature patriotic (16 ft. in height) cold air parade balloons never seen on the Atlantic City Boardwalk, along with other floats and participants stemming from eight different states including: D.C., Delaware, Iowa, Maryland, New Jersey, New York, Pennsylvania and Virginia. Additionally, a moment of silence and remembrance will be had for those impacted during 911.

Those who are looking to spot a celebrity will have the chance to see Philadelphia sports legends Larry Bowa, Bill Bergey and Dave Shultz who are all supporting the celebration and attending the parade. Atlantic City’s very own heroes and first responders from the Atlantic City Police Department and Atlantic City Fire Department will also be participating in the parade, as well as the HERO Campaign patrol vehicles, the Valley Forge Military Academy Band and Platoons, the Marching Cobras, the 78th Army Band, additional string and marching bands, military units, the Patriotic Farm Tractor from Iowa, diverse and cultural groups and more!

The Celebrate America Parade is a family-friendly event for those looking to extend their summer and join the community in coming together to honor heroes with an unforgettable patriotic event. For those about to rock, Hard Rock Atlantic City salutes you!

Set on 17 acres, with the legendary Atlantic City Boardwalk as its backdrop, Hard Rock Hotel & Casino Atlantic City has become Atlantic City’s go-to entertainment destination, boasting 2,200 slots, 120 table games, more than 20 first-class restaurants and lounges, and world-class entertainment, including Hard Rock Live at Etess Arena, the beachside Sound Waves and Howie Mandel’s Comedy Club. The hotel and casino also features the iconic Hard Rock Cafe, overlooking the Atlantic City Boardwalk, showcasing a brand-new elevated menu and state-of-the-art stage, allowing for an amplified level of service and entertainment. Along with an endless array of upscale amenities, including world-class shopping and the brand’s signature full-service Rock Spa and Salon®, featuring 31 treatment rooms, the new, music-inspired property offers lavish guest rooms and suites, with stunning views of the city and Atlantic Ocean. From family vacations and business trips to weddings, Hard Rock Hotel & Casino Atlantic City offers an unparalleled experience. Each of the hotel’s guest rooms and suites radiates a contemporary style, including Hard Rock’s signature The Sound of Your Stay® music amenity program, which allows guests to set the mood with complimentary vinyl records or jam out on a Fender guitar in the privacy of their own room. Hotel guests can enjoy high speed, property-wide Wi-Fi, 24-Hour In-Room Dining, towel and chair service at Hard Rock Beach or at the indoor pool, and access to Body Rock® Fitness Center. For more information and to book your stay, please visit hardrockhotelatlanticcity.com.

With venues in 74 countries spanning 248 locations that include owned/licensed or managed Hotels, Casinos, Rock Shops® and Cafes - Hard Rock International (HRI) is one of the most globally recognized companies. Beginning with an Eric Clapton guitar, Hard Rock owns the world's most valuable collection of music memorabilia at more than 83,000 pieces, which are displayed at its locations around the globe. In 2018, Hard Rock International was recognized as a Forbes Magazine Top Employer for Women and Land Operator of the Year at the Global Gaming Awards. In 2019, Hard Rock International was honored as one of Forbes Magazine’s America’s Best Large Employers, Forbes Magazine’s Top Employers for Women and No. 1 in J.D. Power’s 2019 North America Hotel Guest Satisfaction Study among Upper Upscale Hotel Chains. Hard Rock destinations are located in the world’s greatest international gateway cities, including its two most successful flagship properties in Florida and home to the world’s first Guitar Hotel® in South Florida, where its headquarters are located. The brand is owned by HRI parent entity The Seminole Tribe of Florida. For more information on Hard Rock International visit www.hardrock.com or shop.hardrock.com.