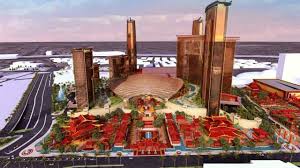 Las Vegas Review - To the naked eye, not much has changed in the year that passed since Malaysia-based Genting Group announced plans to build the $2 billion to $7 billion Resorts World Las Vegas on 87 acres on the Strip.

The concrete-and-steel structure — remnants of the unfinished Echelon development mothballed by Boyd Gaming Corp. in 2008 — remain standing. A year later, other than a few signs touting the coming of the hotel-casino, the site appears unchanged.

But Resorts World Las Vegas is alive and well.

Genting representatives and government officials say the development — the Strip’s first new resort complex since 2010 — is on track to start construction this year. The Clark County Commission handed Genting the land entitlements for the site in December.

“I have every confidence that they are moving forward,” Gov. Brian Sandoval said Monday.

Genting executives and architects recently were in Carson City to brief Sandoval on developments related to the planned 3,500-room Asia-themed hotel-casino.

Sandoval said he is comfortable with the project’s progress.

A year ago, the governor, Clark County elected leaders, tourism officials and the business community flocked to a news conference with the leadership of Genting in the Las Vegas offices of architects Steelman Partners.

The over-the-top announcement that Genting had acquired the site from Boyd Gaming for $350 million included large renderings of Resorts World Las Vegas. Developers even teased that the resort would include a live panda exhibit.

The recession left Echelon and other major developments in limbo. Strip construction jobs dried up.

Politicians and chamber of commerce types were giddy with excitement that a new megaresort would revive the market. But it has been 12 months since then.

“It’s been a busy year, and we’re trying to be thoughtful about the development,” he said.

Genting and people close to the project said much of the final design and planning for the massive resort has taken place out of the public eye. Genting still plans to incorporate much of the Echelon buildings into Resorts World.

“By the next anniversary, the site will look much different,” Friedman said. “We really have been flying under the radar.”

Genting isn’t shy about spending money in the United States.

A year before buying the Echelon site, Genting paid more than $400 million for 30 acres along Miami’s Biscayne Bay for the planned $3.8 billion Resorts World Miami. That project was shelved after Florida lawmakers rejected casino expansion plans, but the company still owns the site and is considering alternatives.

Genting’s biggest challenge has been an investigation by Nevada gaming regulators into the company’s suitability to operate a Nevada casino. A suitability finding is one step below licensing, which would have to be granted before the development opens in 2016 or 2017.

Genting, which has market capitalization of more than $40 billion, operates casinos around the world, including Resorts World-branded properties in Singapore, Malaysia and Manila and at the Aqueduct Race Track in New York City. The company has five separate publicly traded entities that operate casinos and other business investments.

“The group is undergoing regulatory investigations by the Nevada gaming board, which is one of the strictest you can get,” Thay told Bloomberg News. “I’m quite confident we’ll obtain this license, and only with that we’ll commence the construction.”

Friedman said Genting would announce a construction start as soon as it is found suitable.

“(Genting) will deliver a project that complements Las Vegas and particularly the growing north end of the Strip,” Friedman said.

Gaming Control Board Chairman A.G. Burnett said the goal is to place Genting’s suitability hearing “on the soonest possible agenda,” which is likely to be in May or June.

“This may be the largest company we have ever investigated,” Burnett said. “Genting involves multiple industry segments with multiple publicly traded companies. Our agents are overseas, still conducting follow-up work.”

Like all potential licensees, Genting is paying for the investigation.

Clark County Commissioner Chris Giunchigliani, who represents the north end of the Strip and attended the announcement last year, said the commission is reviewing the fencing for the site and signs the company plans to use during construction.

Genting agreed to use union labor in construction, she said. Coupled with the planned Labor Day weekend opening of the $415 million SLS Las Vegas, Resorts World will spur a revitalization of the Strip’s north end.

“My main concern is how many rooms they actually plan to open,” Giunchigliani said. “I just don’t want to see them flood the market.”