It’s the second time in seven months since FREEBETS.com started conducting its research that bet365 have taken the monthly crown and, for the second month in succession, the firm’s Sky Dogs 2/1 money-back offer was rated the best individual promotion.

The offer provides punters with a free bet up to £100 for backing any winner at odds of 2/1 or more on greyhound races broadcast live on Sky Sports channels.

Paddy Power, a four-time winner of the monthly title, was second and was responsible for six of the top ten money-back offers. And with 91 total offers last month, the Irish layer was third on the overall offers list.

In what is a really competitive sector at present, with bookmakers fighting to retain and attract new customers, FREEBETS.com reported some significant activity from the likes of Titanbet and Betway. The former’s money-back promotion if Luis Suarez scored anytime in the Merseyside derby was rated the most likely offer to happen, while the latter had a leading 94 total money-back offers in November, narrowly ahead of Betfair’s 93.

David Archer, owner of FREEBETS.com, said: “While the winner of November’s money-back crown won’t be the biggest surprise to punters, what the team have noticed this month is the substantial increase in high-value and regular money-back promotions from the likes of Titanbet and Betway, suggesting these rising bookmakers are ready to take on the big boys at their own game.” 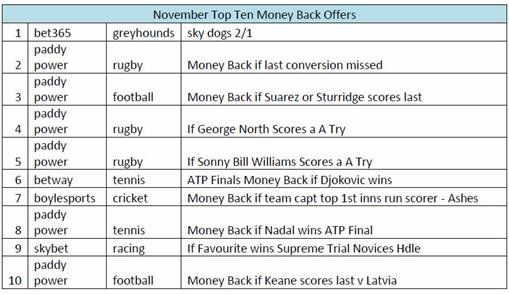 To read all the findings from the November report click here.