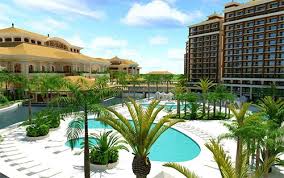 NewCity - an entity established by American investor Mr. Chien Lee - is the latest in a series of investments Mr. Lee has made in hospitality ventures in the Asia Pacific region.

“The Ho Tram Strip is one of the most exciting tourism developments in Asia Pacific,” said Mr. Lee. “This project provides NewCity with the opportunity to participate in the first major integrated resort project in Vietnam.  I expect Vietnam to be one of the fastest growing tourism markets in the region and the Ho Tram Strip development has a first mover advantage in the large scale integrated resort market.  I look forward to working closely with all of the ACDL team as this incredible project continues to take shape.”

Paul Conway from NewCity added: "The Grand is one of the nine major gaming licenses in Asia including the six in Macau and two in Singapore. Our 405 acres also allows exciting expansion opportunities in the future."

The investment was welcomed by ACDL’s majority shareholder Harbinger Capital, with Founder and Principal Mr. Phil Falcone saying: “Harbinger Capital was the first major investor in The Ho Tram Strip project, and we are very excited to have an investor that brings capital as well as marketing and operating expertise to our project.”

The first phase of the Ho Tram Strip - The Grand Ho Tram Strip - opened its doors a year ago, and includes 541 five star rooms, gaming facilities, meeting and convention space, ten bars and restaurants, a spa, teen’s and children’s areas, three swimming pools and luxury retail shops. The Grand has already established itself as the top getaway for residents of southern Vietnam, who flock to the site every weekend. The Bluffs – the Ho Tram Strip’s Greg Norman designed championship golf course - opened for preview play early in 2014, and is already being hailed as one of Asia’s greatest golfing experiences.  It will have its formal inauguration later this year.

The Ho Tram Strip is two hours away from Vietnam's largest metropolis, Ho Chi Minh City, and currently includes The Grand, as well as The Bluffs Championship Golf Course, all set on a 2.2 kilometer beach surrounded by protected forest.

The Ho Tram Project Company is the developer of the Ho Tram Strip and is a wholly owned subsidiary of Asian Coast Development (Canada) Ltd.

Asian Coast Development (Canada) Ltd. (ACDL) is an international development company specializing in integrated resort destinations. ACDL, through its wholly-owned subsidiary Ho Tram Project Company Ltd, is the developer of the Ho Tram Strip, a group of integrated resorts to be located on more than 400 acres of land and more than two kilometers of pristine beach in Ho Tram, Vietnam and approved in an Investment Certificate issued by the Government of Vietnam. With a focus on providing a personalized blend of excitement and relaxation, the Ho Tram Strip will feature something for everyone, from lavish entertainment to premium shopping and exceptional recreational facilities.

The first phase of its development will be Vietnam's first large scale integrated resort and ultimately will include an 1,100-room, five-star hotel, a world-class entertainment facility, restaurants, high-tech meeting space, an exclusive VIP area, a championship golf course, as well as a variety of beach-front recreation activities. Phase I of this development is scheduled to open in 2013. It will be the initial component of the largest integrated resort complex in Vietnam.

NewCity Capital is a Asia focused private investment company based in the US .  NewCity  Capital  is led by Chien Lee who has been the founder, chairman and Chief Executive Officer. Mr. Lee has more than 20 years of investment experience in Asia. He is the co-founder of 7 Days Group Holdings Limited , one of the leading budget hotel chains in Asia, As of December 31, 2013, 7 Days Group had 2,000 hotels in 300 cities, 7 Days Group was listed on the New York stock exchange (NYSE: SVN), Mr. Lee also co-founded  Iao Kun Group Holding Co Ltd (NASDAQ:IKGH) Iao Kun Group participate in the promotion of five major luxury VIP gaming facilities in Macau, the largest gaming market in the world.