William Hill, the proud sponsors of Martin v Joshua, have reported a swell of support behind ‘Prince’ Charles Martin to retain his IBF World Heavyweight title at the 02 on Saturday night. 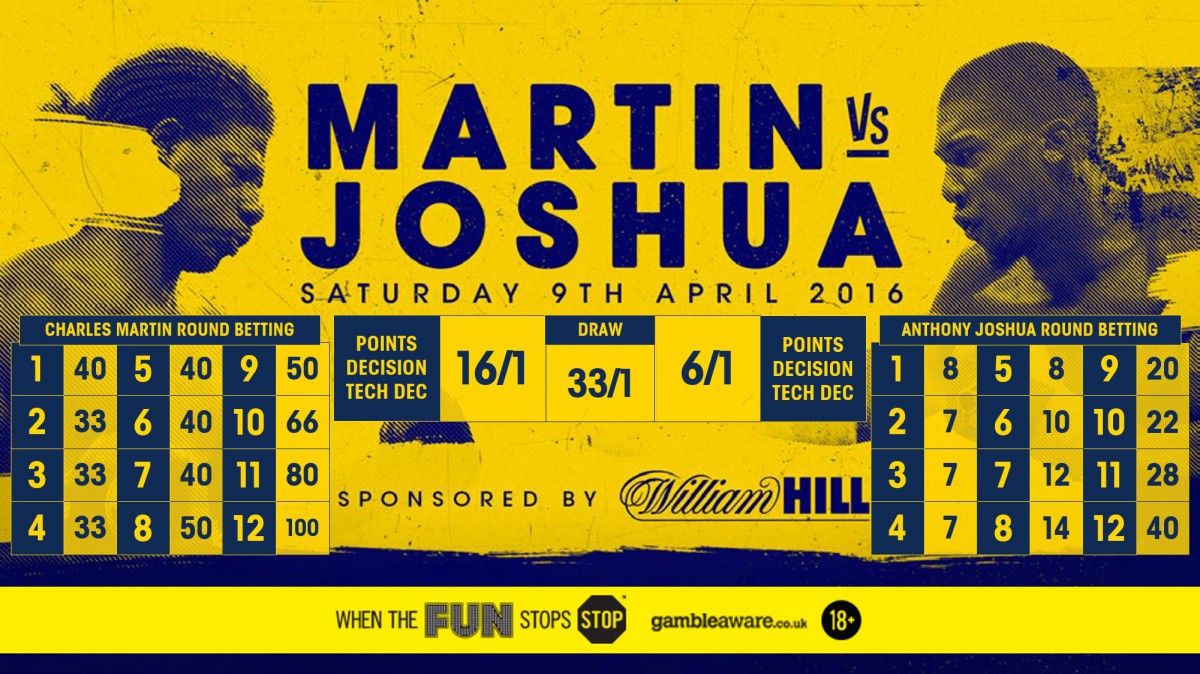 The bookmakers initially made the St Louis native a 5/1 shot to win the bout but hundreds of bets ranging from £10 to £5000 have resulted in his big fight odds being slashed to 7/2. On the flip side - Anthony Joshua, the 2012 Olympic Champion, has seen his odds pushed out from 1/8 to 2/9 to claim a maiden world title.
Both fighters have phenomenal knock-out records. Joshua has a flawless 15 KO’s from 15 fights, while Martin has stopped 21 of his 24 opponents. These stats have unsurprisingly lead punters to favour a KO as the most likely outcome of the fight.
The majority of bets on the method of victory (72%) have been on Martin to win by a KO. Joshua is 3/10 to KO Martin and 8/1 to do so in the very first round.
“Punters are starting to believe that ‘Prince’ Charles has a real chance of beating Anthony Joshua at the 02 on Saturday night and although AJ is still certain to remain favourite to take the IBF title, he’ll be a much bigger price than most people predicted”, said William Hill spokesman Tony Kenny
The undercard is littered with top British boxers. Lee Selby (1/7) defends his IBF Featherweight title against Eric ‘The Outlaw’ Hunter (9/2), while WBA Bantamweight king Jamie McDonnell is a 1/50 chance to defend his crown against late stand-in Fernando Vargas (12/1).
‘Saint’ George Groves (1/33) will be hoping to stake a claim for a fourth world title shot by beating the young Scot - David Brophy (10/1).
Another boxer who will be looking to make a big impression at the O2 is Nigel Benn’s son Conor. Benn Junior, making his pro-debut on Saturday,  is rated a 1/200 shot to defeat Luke ‘The Nuke’ Kelleher who can be backed at 25/1. There are a lot of big things expected from the novice and he’s already rated a 5/1 shot by William Hill to win a world title by 2025.
** You can catch all the action live on Sky Sports Box Office on Saturday night.
LATEST BOUT ODDS FROM WILLIAM HILL
2/9 Anthony Joshua, 33/1 Draw, Charles Martin 7/2
1/7 Lee Selby, 25/1 Draw, Eric Hunter 9/2
1/33 George Groves, 33/1 Draw, David Brophy 10/1
1/200 Conor Benn, 33/1 Draw, Luke Kelleher 25/1
1/50 Jamie McDonnell, 33/1 Draw, Fernando Vargas 12/1
6/5 Matthew Macklin, 22/1 Draw, Brian Rose 4/6
1/25 Ohara Davies, 25/1 Draw, Andy Keates 9/1